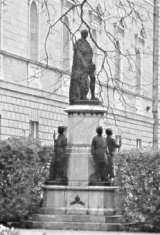 Overseeing the Irish. There is, it seems, a statue to/of Francis Albert Augustus Charles Emmanuel Saxe-Coburg-Gotha [R for Royal] in the grounds of Leinster House; the seat of Government in this our Republic. [backstory] It is right next to the Dead Zoo aka The Natural History Museum [where bullying is endemic], which is in the back-garden of the Dáil and so not really in anybody's face. Who he aNNyway? He's better know as Prince Albert (1819-1861), the 'consort' of his first cousin Victoria (1819-1901); Queen of the United Kingdom of Great Britain and Ireland and Empress of India. Certain republicans have decided, nearly 100 years after Independence, to tidy away this awkward reminder of 800 Years of Tory misrule. Other republicans have pushed back against this Stalinist air-brushing of inconvenient history. The best ironic, quintessentially Irish, comment was that the Dáil should retain the statue of a German prince near where they park their cars to remind them of our current German Overlords. [Die Oberherren übersehen das Parlament].
STOP PRESS: the leave the old boy alone party wins.

Dubliners have a tradition of witty names for their public statuary. My favourite is Urination Once Again [sing it?] for the fountain dedicated to Thomas Davis in College Green. It is, to me, quite peculiar that the prefix Royal should be so pervasive in a country which only acknowledges crowns, pomp and circumstance when there is a royal wedding across the water. At which time, most people are as eager to slavishly lollygag as the English. It was only in 1800, with the Act of Union between GB and Ireland, that the British king [George III another German - who was born in London and spoke better English than German] dropped the claim to be King of France also . . . and dropped the fleurs-de-lys from the royal escutcheon. Is anybody about to drop the Royal from the Royal Irish Academy; Royal Dublin Society; Royal College of Surgeons; Royal College of Physicians of Ireland; Royal Hospital Kilmainham and about forty (40!) other institutions? Don't think so!
Posted by BobTheScientist at 07:28