Last Friday I was doing a double-skype with Dau.I in Dublin and Dau.II in Cork. It was amazing, not from the content but the process because I can remember how inconvenient and expensive long-distance phone-calls were when I was student in Trinity College Dublin TCD in the 1970s. In 1974 I'd go out into the storm, with a fistful of coins, after 6pm when rates were cheaper, to find a traffic-quiet phone kiosk. I'd ask the operator to make a connexion to Fyfield 352 - no, not the Fyfield in Wiltshire; the one in Essex. It would take the operator some time to find a route zig-zagging across Wales and England until the phone rang in my parent's home. After a particularly efficient connexion the operator told me the coding that had been successful [Holyhead 54 - Chester 72 - Birmingham 458 - Bishop's Stortford 8] and recommended that I tell the next operator. To 1970s me, free video-conference calls would have been science fiction fitting Arthur C. Clark's Third Law "Any sufficiently advanced technology is indistinguishable from magic."

Dau.I was telling us about her adventures at the coal-face of culture in the Capital. She and a pal had tried to go to the Dead Zoo to pat the Quagga but it was closed, so they'd drifted into TCD to see the giant Irish deer in their Zoological Museum. That was about to close, so the pair went down to the Physics Department where Dau.I had attended an evening course in astronomy when she was a teenager. I got moderately excited and asked if she'd seen the TCD replication [replication very important in science!] of the World's longest running experiment. On the phonio I was out in my timing by about 80 years tsk! but I was right in the principle that bitumen/pitch is a liquid with a boggling-high coefficient of viscosity.  In 2014, the TCD pitch-drop experiment yielded an observed data-point because the web-cam had been invented since the experiment started in 1944. 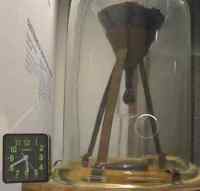 In that video capture, the Irish had stolen a march on the really longest running experiment - a pitch-drop device started in 1927 in U Queensland [Look L for suspense!]. By a wonderful coincidence, the morning after I had told The Girls about a local pitch drop experiment, the Australian venture hit Metafilter. It is news-worthy because the Ozzies are gearing up for the delivery of the ninth drop after 86 years of run-time. Ten years between events sounds long but 'tis nothing compared to Transits of Venus.The pitch was heated and poured in 1927 but allowed 3 years to cool and settle - "running" started in 1930. You can register and sign in here. If you are logged in when the bedside alarm-clock registers the tremor of a falling drop, then you'll be inducted into the Dweeb Hall of Fame or made a co-author on the Nature paper or both.  This webcam image capture is as old as the WWW. A Cona coffee pot was fitted up with a web-cam in the Trojan Room in Cambridge U in the early 1990s so that the boffins would never make a fruitless trip down the corridor for caffeine. It went on the Web on 22 Nov 1993. I can remember checking up on the coffee-pot from Dublin in 1994 when I was setting up one of the earliest Irish web-servers. It was a metaphor for the absurdity and futility of much of the content on the later WWW including the trivia of twitter. You can forment a riot and topple an oppressive regime by effectively mobilising twitter, sure. But you can also flood the servers with pictures of your breakfast toast. Reminder before you post: 10% of the World's electricity is consumed by servers . . . a single picture of the toast will serve - a video of the butter melting is maybe OTT, hmmm?

Viscosity effects? Try something intermediate between pitch and ethanol. Destin Sandlin at Smarter Every Day looks at the patterns made by falling honey and looks at the equations of fluid dynamics - <whoop whoop algebra alert> but also explains that there are areas of the problem which are currently beyond the reach of science. Nobody knows why the the falling honey flips from coils to chaos but you can easily observe when it happens with a shampoo bottle in the show. Neat! Here Destin launches his SED channel with a noisier explanation of the difference between detonation and deflagration than my wordier and more killing essay of 4 years ago


Posted by BobTheScientist at 07:24