We're hanging out in Bath formerly Aquae Sulis. You want to be careful of getting run-over by culture in Olde Worlde towns like Bath - or struck by the selfie-sticks of a bus-load of Japanese tourists following the guide with the red-and-white umbrella aloft. The waters are something else in the line of sulphur and give pause to ever complaining about residual chlorine in the tap water: try a glass if you're in town; it's a unique experience. We walked into town between heavy rain-showers on Saturday morning to catch some museums with the Gdaus. The Victoria Art Gallery VAG is one of the nicest and least pretentious late 19thC civic museums in the whole world. Minor art works, by artists of whom you've heard, cover the walls and the oak floor-boards creak as you walk reverentially through the galleries. I have a good friend who raised two children in the Museum of Fine Arts MFA in Boston when there was no entry fee and you could take the kids in for 20 minutes or whatever period for which they had patience. The VAG is like that for Gdau.I: increasingly familiar and friendly and a quiet haven from the beeps and crashes of devices. 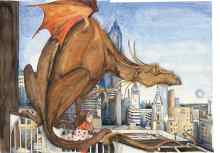 We caught the first few hours of a Summer show called Here Be Dragons which is a gallery full of original artwork dragons from kid's cartoon books. That's nice, especially if you are up-to-date with the latest dragons which are trending in children's literature. I may be over-empathising with my 6-year-old self but I can't imagine many children having the patience to look at loads of pictures of dragons without looking for a bench on which to sack-out-exhausted. I reckon you-the-adult have to give the weans some structure. Me, I'd concentrate on the evolution of dragons, some of which are far more credible than others. All the descriptions suggest that they are some sort of reptile and all land-dwelling vertebrates are tetrapods. Even if, as adults they have lost some of those four limbs. Thus for me dragons with four legs AND a pair of wings are a) unlikely and b) almost certainly descended from a common ancestor. If you were hot-housing your kid to be Director of The Museum of Comparative Zoology in Harvard, you could help them design a check-list of attributes and use these data to construct a phylogenetic tree of relationships among Gruffalo, Smaug, and Haku.

Another brilliant idea was to mobilise a day's worth of kids and their Dads in the Lego Dragon community art-push. Anyone younger than me is familiar with Lego: I was part of the first generation of Lego-builders when the little plastic bricks came to  the UK in 1960ish. There were red bricks and white bricks. The Lego Dragon project was create a paint-by-numbers, highly pixellated, picture of a dragon out of buckets of 1x1 lego bricks in 32 different colours. The whole picture was broken up into 16x16 blocks which were distributed to punters along with a map of that section specifying which colour went where. Your task should you choose to accept it was to fill a base-tile with the coloured bricks according to this recipe and turn that in to Dragon Central.  Each completed tile was then stuck in the appropriate on the wall. There wasn't room for a third pair of hands tricking about with minute Lego-bricks so I set myself the task of of picking up, colour-sorting and returning to base bricks from the floor and abandonned on tables round the room.

The Boy and Gdau.I went at a rather boring (mostly black and dark blue) infrastructural square [L indicated by maker]. At least she stuck to her last like a good cobbler. The room was mostly populated with isolated fathers doggedly finishing up while their sons ran noisily around the room like . . . well, boys. The whole picture consisted of 16 x 12 of the 16x16 blocks or 256 x 196 = 50,000 pixels, You just need a couple of hundred people to contribute 25 minutes of their time et voila dragon!
Well it turns out that making Lego-mosaic pictures is A Thing.  Like all Lego stuff it is expensive.

Verdict: good idea, please copy for
other art-work; not necessarily dragons.
Posted by BobTheScientist at 07:19