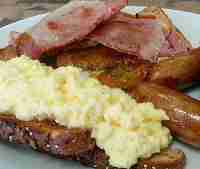 In 1974, I was sharing a flat – on Lansdowne Road about 50m from the gate to the IRFU Rugby Football ground – with three accountants and ‘walking out’ with The Beloved. She was living six-to-a-room under the thumb of La Sainte Union LSU nuns. She decided that it would please her mightily to cook for her man and went into the little grocery round the corner from Lansdowne Road to canvas for suggestions. The grocer and his wife said that young chaps were partial to fries and sold her 1 egg, 3 rashers, two sausages and a small loaf of bread. She came up to the flat and cooked these up for me. As I was then living predominantly on cheese and chocolate biscuits, this was considerably more healthy that I was used to getting. Salads did exist back then but quinoa, balsamic vinegar and red lettuce were a long way in the future. And there were supermarkets but even there the choice was severely limited – two sorts of cheese only = red and white cheddar.

Five years later, when I first went to America, my eyes were on stalks to find that a whole aisle of the football-pitch sized store was devoted to pet food: there was more product choice there than in the entire inventory of a typical ‘super’market back home in Dublin. And 20 brands of coffee, 100 varieties of cheese, 200 sorts of ice-cream.  We’ve more or less caught up with Yankee-dog consumerism now. And we’re a long long way from being able to buy a single egg and two sausages in any shop.

We’re over in England this week and so get a different view of shopping in, say, Morrisons.co.uk than in, say, Supervalu.ie all of which tends to emphasise that food is riotously more expensive in Ireland. For one example, Strong White Flour SWF is €1.85/1.5kg bag in Ireland but only £0.95 = €1.08 WTF?! = 67% more in Ireland than England. The English arrangement of aisles exposed innocent me to new products which showed how easy it is getting to part the consumer from their money by ‘adding value’. A repellent orange discus shrink-wrapped in plastic is labelled “Spanish tortilla” and sold at £2 = €2.25 /450g. That is at least 50% potato which retails in the next aisle at £0.50/kg: that's a lot of added value. How difficult can it be to cook a tortilla from scratch?? Then there are aisle-labelsindicating where to locate:
which indicate further disempowerment of people in their quest to ‘Eat food, mostly veg, not too much’.