I'm a bit of a Wikipedia groupie - not a total slave - but I get triggered for a certain amount of blob-copy by reading Did you know . . . and On this day . . . at 0600hrs in case I miss the birthday of some famous female scientist. Intriguingly List of London Monopoly locations includes thumbnails of each location and the current price of property there, taken from an article in The Independent. In 1936 the locations were chosen by Victor Watson, managing director of Waddington's, and his secretary Marjorie Phillips, on a day trip to The Smoke from head office in Leeds. Apparently they had lunch at a Lyons Corner House, that used to be a famous local pub, in Islington which event was commemorated in one of the cheaper properties on the board The Angel Islington. The conceit of the Independent article is to compare the pre-WWII prices with the astronomical amounts that are required to buy (or rent) your own gaff in the British capital. Notwithstanding the difficulties I have to get to a cultural event or a really good riot in London, I think our humble farm is better value. I've no idea what our 7 ha. and ruined sheds are worth but let us conservatively put it at half the cost of a 2 bedroom semi in the ropiest part of monopoly land Whitechapel Road where the average house price is £590,000. With the £300,000 I 'save' by living remote I could fly to Dublin - London day-trip [11 August 2017 = £60] every day for the next ten years. 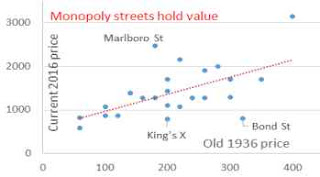 I'm assuming that they were unreal only in the sense that the absolute value. In 1926, the price of a new home was (UK average) ~£600, in 2016 it was ~£300,000 up 500-fold [source]. That's a pretty crap source because they claim "In comparison, a pint of milk cost the equivalent of 1.3p in 1926 and is only 42p today. If it had risen in line with property prices it would cost £612.57." Which is plainly bonkers [1.3p * 500 = £6] because they don't know the difference between pounds and pennies. The BBC claims a 1930s 3-bed house as £350.  aNNyway, it looks like the price of housing in London has been a rising tide that floats all boats rather than some sort of exponential function in which Mayfair got disproportionately more exclusive than the Old Kent Road. And I've high-lighted the outliers above and below the trend-line: Bond Street is going down in the world while Marlborough Street is on the up-and-up. And of course parts of Kensington recently went up in smoke. Here's Jonathan Pie [warning may make you cross all over again] deconstructing the politics of discrepant wealth. Here's a wordier but no less angry deconstruction of London housing policy which contrasts empty investments of /for mega-rich foreigners with dispossessed, but still British, citizens living in hostels at the foot of these condominiums. Whose bright idea was that and. more importantly, cui bono??