Friðarey the earliest record name in old Norse might mean Fair Isle or possibly the Far (distant from Trondheim) Isle or even Sheep (of which there are many) Isle. It is located on the UK Shipping forecast which you can catch updated several times daily on the BBC. Fair Isle Westerly 5 to 7 backing southerly or southwesterly 3 or 4. Moderate or rough becoming slight or moderate. Occasional drizzle until later. Moderate or good. This is weather for those whose lives depend on it rather than those debating about whether they should bring the laundry in. The terse, business-like tones skip the signifiers Wind; Sea State; Weather; Visibility as a) redundant b) obvious to all the people who matter:<warning don't watch if you tend to sea-sickness> those in peril on the sea. Okay, that doesn't help very much with the Where? Fair Isle is situated almost exactly midway between Shetland and Orkney, the major archipelagos off the North coast of Scotland. The scale is such that to show the location of Fair Isle the island is perforce reduced to a mere dot. But that's not fair; the Earth itself is a small blue dot from some viewpoints. Here she blows on a scale [1 blue square = 1 sq.km] to show where all the 50 inhabitants live: 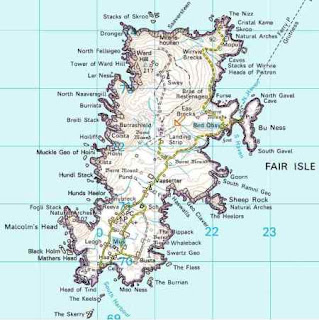 This is a map you can play your mind over. It is like the maps of islands I used to draw after I learned how to read the symbols on Ordnance Survey maps aged 11ish: coves and cliffs; moors and mudflats; church-with-a-spire; deciduous woodland. I could have it all because I was drawing it all . . . like a god; or at least St Isidore of Seville patron saint of cartographers (and a lot more).  Contact with the outside world is by ferry to North Haven - you can see the dotted line heading NE to Shetland.

I'm here because it was always my intention to include Fair Isle in the Island Index, but more immediately because I'm reading a new-to-me, and rather wonderful, nature book The Running Sky: a bird-watching life by Tom Dee [reviewed]. Lucky you, it's become a 0.01c book on Amazon. It's quite like The Worm Forgives the Plough or The Old Ways or Sightlines all of which I've gotten enthusiastic about. Tom Dee has made it easy for himself by having 12 chapters to his Life and calling each after a month: a life in a year of birding.  I must say that I was a bit off-put by the subtitle because I've never had the patience to be a bird-watcher not least because of the pejorative synonym 'twitcher' which encapsulates all the obsession and futility of maintaining an ornithological check-list.  This despite a rather respectful trib to Phoebe Snetsinger and the fact that two of my best friends are driven by the ould birds. The Running Sky is a book of poetry masquerading as tales of the outdoors; I guess it's an acquired taste but I'm really enjoying it.

Tom Dee's September is Fair Isle; which is inaccessible, yes, but is also a cross-roads and haven for migratory birds. So twitchers make their way in large numbers to its shores. The flu$h and time-poor go by plane, the indigent board the Good Shepherd (the current boat is the IVth instar of the ferry) for a 3 hour crossing. Fair Isle may by fair but it achieves that by being fair in comparison to the heaving sea that surrounds it. The first time Tim Dee made the trip he lost his lunch within minutes of leaving harbour; the second time, forewarned, he skipped lunch and had a yet more wretched time dry-heaving bile. Getting to this ornithological heaven is a very protestant pilgrimage - all hardship and discomfort. Fair Isle works its magic in its place names and also in the birds, for some of which this is the only place in Europe to catch them: ring-ouzel Turdus torquatus; redwing Turdus iliatus; not to be confused with a redstart Phoenicurus phoenicurus; willow warbler Phylloscopus trochilus; yellow-browed warbler Phylloscopus inornatus almost certainly lost; lanceolate warbler Locustella lanceolata; bluethroat Luscinia svecica.

In April this year the NHS was advertising to fill the post of nurse-practitioner. It would have required a rather special person to fill the post: a great love of puffins Fratercula arctica, sheep Ovis aries storms or crofters would have been an asset.

More islands far far away
Posted by BobTheScientist at 08:11