There is a great moment in Shakespeare in Love [watch! that's an order] where Art triumphs over Cash.
Hugh Fennyman: Now listen to me, you dregs, actors are ten a penny and I, Hugh Fennyman, hold your nuts in my hand.
>!RUMPUS!<
Hugh Fennyman: Uh, one moment, sir.
Ned Alleyn: Who are you?
Hugh Fennyman: I'm, uh... I'm the money.
Ned Alleyn: Then you may remain so long as you remain silent.
It should be made compulsory watching buy [sic] all who affect to support the Arts. All those who have a comfortable desk in the Arts Council or make decisions on behalf of some millionaire bond-trader who is 'giving back'. The metaphor "actors are ten a penny" sums this attitude up just perfick. Because it's just not true. True talent is fabulously, worryingly, rare. And far too often it dies, like Keats, in a garret. Well, erm, actually, of course, it was the TB that did for Keats. Having talent is not always consonant with having infinite bottle and you can hardly blame youngsters if they give up, or back-burner, their Essential Self to get a job that pays some money - because eating can be fun too. 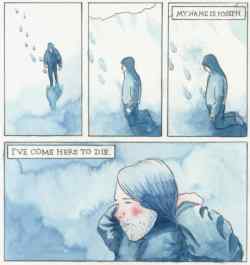 Yesterday was Small Press Day 2017 in Forbidden Planet in Dublin. I am amazed and delighted that two dozen 'creators' turned up to showcase their work - there is hope for the world if that many examples of The Talent are walking the streets of Ireland today . . . and some of them may even have warm homes and dry beds in which to sleep tonight. I only know about the event because I've known one of the participants, Clare Foley, since before she could tie her own shoe-laces, and Dau.I and Dau.II told me that their BFF was launching her latest oeuvre Frozen Waste [L] [reviewed] yesterday. This recent interview gives some insight into the process of creativity and inspiration. I got hold of a copy of her illustrated version of Honoré de Balzac's La Grande Bretêche which Foley had released plate by hard-won plate on Tumblr before getting a very short run printed. Whatever it was that inspired a young woman to spend months drawing and lettering panels to represent a minority interest short story from a different country, it was not to make a million bucks. That seems to be the empty and unsatisfying 'ambition' of too many unhappy people in these benighted times. I won't make a million bucks either by selling my 1st Edition when Foley goes all Harry Potter on us . . . I'll only make £40,000 for making that modest contribution to the support of a young artist at the beginning of her career. As I said at the top of this piece it's not about the money.  It is, as Neil Gaiman says, about Make Good Art.  Any art! I've tribbed W¡ld a bunch of young-and-amazing, and like Foley home-educated, musicians before.

And I've written before about paying every adult a Basic Income so that each one can get on with making something of themselves rather sacrificing their talent on the altars of Mammon.
Posted by BobTheScientist at 09:11