It seems you can never have enough houses. But that seems to be partly because houses are more than shelter nowadays, they are assets. Indeed families in the st will elect to be in debt for their whole working lives in order to acquire their 'own' home.  This can be seen most clearly by selecting Ps from the Pocket World in Figures 2015: Average number of people per household: Portugal 2.5; Poland 2.6; Peru 3.9: Philippines 4.6; Pakistan 6.8. For comparison Ireland and France have 2.3 people in each home. Everyone shouts that there is no future in small family farms and each generation the potential farmers flee to the bright lights of the city where, for most of them the conditions are a mixed blessing. Pat the Salt was born on Longcross St, Cardiff in 1925 . . . in a home on Longcross Street, silly. Shortly thereafter, his mother, restlessly trying to do better for her family, shifted the menage over the back-garden wall to System St. That short journey can be found on Google Maps complete with street-view pictures of both homes: 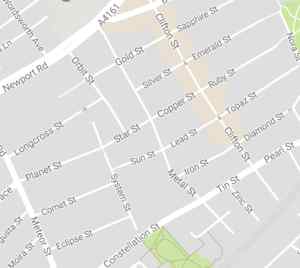 I've known Pat for more than 40 years and for many of those, I misheard that he had lived on Cistern Street which I thought was a rather brutally appropriate name for an urban stew. "Now then, bailiff, flush those Irish chappies out, we want the houses for the Barbadians". System Street is a peculiar enough name, I guess, until you see the context. The surrounding area includes Comet, Constellation, Eclipse, Orbit, Planet, Star, and Sun Streets. Further East we have a block of Copper, Gold, Iron, Lead, Silver, Tin and Zinc Streets and then Diamond, Emerald, Pearl, Ruby, Sapphire, and Topaz Streets. These streets were laid out in the 1860-1880s from the Bute estate and other developers. I think the names show a nice, and rather unpretentious, sense of imagination.  All these streets and more are in the suburb of Adamsdown which 200 years ago was farming country [like N Dublin was 20 years ago], albeit a short walk East beyond the walls of Cardiff City and Castle. Cardiff Castle and many of those farms were the property of the 2nd Marquess of Bute, a mighty Victorian landholder with estates all over South Wales and Scotland.

I can look that sort of stuff up because I paid €9.99 for Kevin Cahill's Who Owns Britain [available on Amazon upwards from £35] which investigates a window in 1872 when all the estates in the United Kingdom were enumerated in The Return of Owners of Land in England, Scotland, Ireland and Wales a four volume, 2000 page Domesday Book. For ordinary folk living on , say, System Street, the Land Registry holds, since 1925, records of who owns the property next door. But the Land Registry only records transactions and  many of the Great Estates are now wrapped up in Trusts with life-time beneficiaries, so the ownership of much of the country is not a matter of public record. In 1872, the 3rd Marquess owned 117.000 acres but because of Cardiff and its docks and the South Wales coal-fields he was the 8th richest landowner in the country but only 33rd in terms of area.

The 3rd Marquess had to thank his dad the 2nd Marquess for not resting on his huntin' and shootin' estates but hunting around for ways to improve the value of his property: notably, as I mention above, improving Cardiff Docks to facilitate the export of iron and notably Welsh steam coal and high quality anthracite from the Rhondda Valley.  The iron industry developed in South Wales because of the ready availability of coal locally but both developed through the vision of The 2nd Marquess. It was a close run thing because those massive development projects required enormous amounts of capital and the Marquess borrowed heavily to see his projects through and that took many years. The homes of Adamsdown were developed to house the workers, a great many of them Irish, who were hired to build and work the docks and other infrastructural works. The Welsh had the mining itself sewn up.

2nd-Bute was a stoic of the old school and much admired by Neil Todd my boss from graduate school who was also well 'ard a stoic of the old school. He spent many hours at home and in the field researching Welsh tavern tokens locate the place of origin of these coin-like entities. In 1985, we spent a wonderful short week wandering up and down the Rhondda Fawr [you can sing it] - Treherbert (the rail head) - Treorchy (the choir) - Ystrad - Tonypandy - Treslaw - looking for pubs [R Brains is the local brew] and cats. It was our last field-trip together. According to Neil (I can find no trace of this on Google) the 2nd Marquess lived by the following motto:

I have no god
I feel not Winter
I heed not Summer
I fear not death
You wouldn't call that a very sunny view of life, but it is one I can live by too.
Posted by BobTheScientist at 07:41