I pulled a tick off The Beloved's back last week when she came home from gardening in the long grass. It was almost certainly an example of Ixodes ricinus the European sheep tick because that is the commonest long-grass sit-and-wait predatory tick in Ireland.  I've written about these annoying arachnids before: counting their legs, enumerating the diseases which ticks carry, advising on the best way to remove t'buggers. And I've elaborated on the spread of Lyme disease across Europe as the ranges of Borrelia burgdorferi, Ixodes ricinus and Homo sapiens overlap: for Lyme disease it takes all three to tango. 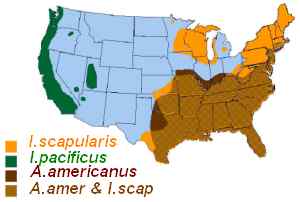 But wait, isn't Lyme disease named for a town in Connecticut? I know there are humans in that state, but isn't I. ricinus a European tick? Yes, but the role of the third horse in the deadly troika is taken up in North America by Ixodes scapularis or in the West by Ixodes pacificus. You can see from the map that Lyme disease is confined to E, SE and S Central states . . . and to Wisconsin and parts of Minnesota and the Upper peninsula of Michigan. I'll guess that this North-Central island of infectivity has been created by importing dairy cows to the cheese states.  You'll notice that the map includes a third species called Amblyomma americanus the lone star tick which has been in the news stateside these last tuthree years because it appears to be the cause of a new and distinctly unamerican medical condition called mammalian meat allergy MMA.  Midwesterners should also note that the overlap-map is a couple of years out of date and now A. americanus may be found in Ohio, Indiana, Illinois and Iowa which used to comprise the blue tick-free band just S of the great lakes. What caused the break-out? Nobody knows but the obvious money is on climate change despite the fact that this phenomenon is also highly unamerican.

MMA, which puts even red-blooded Americans off their hamburgers and steaks, appears to be due to the immune system over-extending its brief from killing pathogens to attacking food. The key molecular player is the disaccharide galactose-alpha-1,3-galactose hereinafter and everywhere known as alpha-gal. This is a common component of the cell membranes of most mammals, except peculiarly primates, so could well be recognised as non-self by an over-active immune system. They haven't yet tracked down why A. americanus triggers the cross-reaction. Suggestions include remains of a previous mammalian blood meal about the mouth-parts; something in the tick saliva that looks like alpha-gal; some as yet unknown microbe carried by the tick.  Whatever the mechanism, the association between MMA and a tick bite from A. americanus is epidemiologically quite clear. And from years of experience with fighting Lyme Disease and Rocky Mountain Spotted Fever it is also clear how you can avoid the zoonoses: sit on the couch eating potato chips and watching other folks exercise on the TV is one strategy; wearing long pants and giving yourself a check-over when you come home, is another. Come to think about it checking each other all over for ticks after every time you go outdoors could be a way to cement a partnership in an I'll show you mine, if you show me yours sort of way.

My new interest in ticks was triggered by an article in Wired on MMA and alpha-gal which also brings in the connection between tick-bite and the blurf of side-effects from the anti-cancer medication cetuximab (which must be a chimeric monoclonal antibody). Finding these connexions requires alertness and a wide-ranging curiosity and deserve a hats-off from the rest of us.

You might also reflect here on the fuzzy boundaries of immunological self vs non-self. Clearly food isn't normally treated as non-self, so the study of MMA may give us clues about the discriminatory powers of the immune system. The cross-over between allergens should remind you of Campylobacter chickennuggeti triggering Guillain-Barré syndrome.
Posted by BobTheScientist at 07:50