Throw it away - it's old

My late lamented mother-in-law grew up on the edge of the Sahara without a fridge or sell-by dates . . . and survived. One of her more inspiring traits was to take responsibility for the food that came into and went out of her kitchen. She used her nose and eyes to decide what was and was not fit for food and safe to eat. She'd use cream, for example, that was days over its sell-by (especially if it had been unopened in the fridge) because she had a life-time of experience under the regulations of the catering trade and cooking under very adverse circumstances. Parsimonious me has tried to follow her in using food up: what can't be served raw will go down well cooked. That's why, after all, spices were imported from The East - keep calm, curry it up and carry on.  The problem for the younger generation, who have been babied by safe-food regulations all their lives, is that the treat sell-by dates as proscriptive rather than advisory.  In May, I made some perfectly safe cattle cake from ingredients that had expired 2 years previously.   You can, of course, see where the Food Safety FSAI [prev] is coming from, especially w.r.t. food for sale, but it galls me to see people condemning nutritious food in a world where so many children are starving.  And yes, there are issues with over-production in the EU and over-buying among EU families. If folk had less money they might be less wasteful; in the same way that we, you and me both, would drink from the toilet-bowl rather than die of thirst.

It's not only food. The Market also over-produces printed matter and writings become obsolete. My eclectic collection of 3,000 books have almost all been acquired second-hand or remaindered.  The core of the collection was acquired by haunting yard-sales in suburban Boston the early 1980s so my library is a little off-balance or quirky: the 1930s being better covered than the 1990s. A Romanian dictionary is not going to 'go off' any more than a collection of stories by W.W. Jacobs. None of us will have the time to read all the books published this year in English, ou même en français, to decide which suit our temperament - so we might just as well read randomly and be occasionally surprised and delighted by unexpected books.

Now I make no bones about the fact that I love maps and I'll admit that a few too many of the books I bought for 25c in Boston were atlases. One World Atlas from 1939 is interesting to give a view on Europe before the Iron Curtain but I shouldn't have bought three at various times. After a while, maps and atlases have diminished utility. My street map of Dublin 2000 AD shows an agricultural void where Dau.I's current digs are surrounded by 300 homes and a shopping precinct. The Celtic Tiger promoted the building of a motorway network that, in some cases, makes the old National Routes obsolete by-ways. aNNyway, I was passing through New Ross last weekend to do some research in SW Co Wexford and decided I needed to purchase sheet 76 of the Ordnance Survey 1:50,000 Discovery Series. 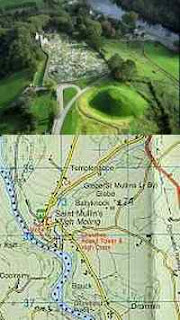 In the 3rd shop I tried the lady had to get a stool and rummage on a high shelf to find a bundle of the distinctive blue maps. I'll spare you a picture of New Ross and go further up river to St Mullins [R aerial pic and OSI map]. She shuffled through the stack looking for Sheet 76 - which might well have been sold out because New Ross is centred thereon. But with a harmonious "Aha!" we found two copies halfway down the pile. Win! because I'd got what I was looking for but also because I'd rather support a small local shop than buy the map from a megacorp garage on the road out of town. I gamely but facetiously suggested that she might cut me a discount because the map was 'old' but she trumped that to say I could have it for free because, as far as the shop was concerned, it was just clutter because a) they felt unable to sell an obsolete map b) the wholesaler would not take unsold maps back and c) nobody uses maps anymore because they all have GPS in the cars.  Even after I asked, with rhetorical flourish, if The Hook peninsula was still there? and pointed out that no new motorways had appeared on the map, the shop-keeper was determined that the maps were beyond sell-by.
If they were really clutter, I asked, could I have some of the other maps?
Take them all,  she replied.
I can't do that, I said, but I'll take one copy of each different sheet you have.
And it was, so! I came away with sheets 67, 68, 69, 75, 76, 77, 82, which more or less covers the whole Sunny South East of the country . . . and bizarrely sheet 83 which covers Killarney and MacGillicuddies Reeks in the far West . . . and an irresistable second copy of sheet 68 because our home is in its very centre. Even after slapping an unasked-for €20 on the counter I came away super-delighted. Not since 2002 when I rescued, from the curbside trash, 10 sheets of the old orange 1/2 inch to the mile 1:126,720 series have I made such a cartographic coup. A bargain is when both parties come out of an exchange feeling satisfied. A bargain was struck in New Ross last Saturday.
Posted by BobTheScientist at 07:21