If things hadn't been so busy on the science and geography front this August, I would have blobbed on along the domestic front where Young Bolivar and I have been building a wood-shed out of wood. A couple of weeks ago I was acting all parsimonious when Bolivar cut the builder's line !! rather than untying it. But he's really redeemed himself on the off-cuts.  The design has been to sink six telephone poles into a rectangular grid to form a [ shape: open along one long side. Because the whole site is on a 10% slope and because the closed side is 50cm below the open side to pitch the roof, every pole is a different length. It was hard enough to get our eccentric local pole-supplier to deliver aNNy poles, so it was going to be a bridge far too far to ask him to cut them all to different lengths. So I asked for six 14ft = 4.25m telephone poles and they finally arrived, when I was briefly off site, about 8 months !! after I'd ordered them. 4 of them arrived cut (roughly) to size and the other two had just been fecked in on top of the pile on the bed of his truck. These two were more than 30ft = 9m long and The Beloved and Bolivar were subjected to the poor mouth about whether we'd give him €10 extra for each off-cut as he made a huge meal about cutting one of them. To stop his gab and get him off site so that life could continue, he was paid off immediately. The off-cut was nearly 2.4m long so it will serve as a gate-post in due course. We juggled and sorted the 5 cut-to-length spars and put the longest one at front-and-bottom and the shortest catty-corner opposite.

The four corners allowed us to establish the horizontal line, so that regardless of the rough ground the 6x3 wall plate at the top of the structure was level. It is scarcely credible when you see the "floor" hanging 75cm above the ground at the downhill end [R see the red ticks on a downhill and an uphill pole]. When we finally got round to cutting the long pole to size, we found that we were left with an extra 14ft pole in the off-cut for the extra €10 [win!!]. As the original contract was €110 for 6 = €18+ each, this was double win. We braced each pole with stout pegs in the ground and a hypotenuse made out of any available sufficiently long lumber screwed at each end. The poles all taper because they are milled from the living tree, so we agreed to make the outside edge vertical. But two of the poles had a noticeable bow and we'd had to fudge that. Bear in mind that we were, at the same time, ensuring that the base of each pole was still forming part of a rectangle . . . the diagonals have to be equal, folks . . . but the diagonal has to be taken from the inside edge which, because of the taper, is not vertical.  It's not as easy as building with Lego. 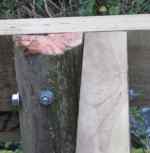 I thought we then had a tedious and teetering leveling job on the top of two ladders to ensure that the wall plate was level but Bolivar was smart enough and confident enough of his measurements to take the level at a convenient 'floor' and measure the vertical heights from this.  Next, we cut 5cm notches at the top of the poles with hand-saw and chisel, drilled a half-inch = 12mm hole through the 6x3 = 150x75mm wall-plate and the pole. We had a 13cm spade-bit for the drill but we needed to borrow an extender because the total depth was about twice the length of the bit. In a workshop with a drill-press you could do this by drilling precisely from each side to meet in the middle but not at the top of a ladder with one hand for your work and one hand for yourself. We had bought a lot of half-inch threaded steel bar, robust washers and nuts [L for a finished joint between two horizontals and a vertical]. For safety, we tied off the standing end of each horizontal beam while working on the other. The wall-plate on the back wall is 50cm below that in front.  The wall-plate on the short edges is horizontal with the lower side so another notch has to be cut in the front poles 50cm below the front wall-plate.

This is 'obvious to all thinking people' but we saved a bit on the 45o braces installed between vertical poles and horizontal wall-plate to stop the whole thing shearing into a pile of sticks if you lean a ladder against it. 6 poles needed 2 braces, one on each side and I thought 4ft = 1200mm would be big enough and a convenient divisor for the 4800mm stock length of 6x2s [see top imagining in diagram above]. But that would require 8 cuts and leave a lot of triangular off-cuts. No sane person would do that with 45o angles, they'd rather employ the lower idea and make 5 this-way-that-way cuts. But IF that person is thinking on their feet, and they make the braces slightly less than 1200mm but still robust enough for function, THEN you can get 5 braces out of each timber and have an off-cut long enough to be useful. With all the savings on the 6x2 front we were able to install an extra braced 6x2 horizontal between the two central poles that hadn't been on the original inventory. Win!! and now we have a nice strong central timber for when we butcher a hawg.

The base of the wall is braced by a skirt of 6x2s = 150x50mm which we stepped down in the middle [see L] to go a small way towards accommodating the fall of the land and make it easier to bolt each structural member to the middle pole. You might think this a bit daft because the poles are braced, indeed hopefully immovable, by the ground but they are robust because they will later serve as the bottom of the wall. Between the wall-plate and the skirt, we had been advised that 4x2s would be sufficiently strong to take nails supporting the vertical planks of the wall. Three runs of these 4x2s at 60cm centres were reckoned to be enough. Rather than bolting these to the poles they were fixed with massive 100mm screws, two at each end. These timbers were lumber-yard stock 4.8m = 16ft long and 'pressure-treated'. As our consultant chippy moaned, pressure-treating is pretty much nonsense because in the rush to get stuff from Swedish forest to Irish hardware yard, you can't tie up capital letting the timber dry out for months. So the pressure vessel is trying to squeeze the anti-fungal preservative liquid into a timber that is already full of liquid so it doesn't penetrate very far. Some of the timbers were noticeably heavier than others.

Although the shed is meant to be 8ft by 24ft to take advantage of the standard 8ft = 2.4m and 16ft = 4.8m dimensions used in the timber world, our shed, like Topsy, had grown a tad because the telephone poles were fatter than our original 2x2 surveyors stakes a year ago. So I needed and ordered 12 lengths of 4x2, three for each between-poles section. Like an eejit, I neglected to order a few extra on the free-delivery truck. But I'd been told that, if I travelled further than the nearest creamery and was prepared to pay a small premium, I could get better quality, more reliable timber from Declan Byrne in Graigcullen, just across the River Barrow from The Institute - 40km from home. Young Bolivar redeemed himself with cutting the builders line by scarfing together two off-cuts of 2x4 to make a single strut a little longer than 8ft [R above for diagram of a scarf joint]. 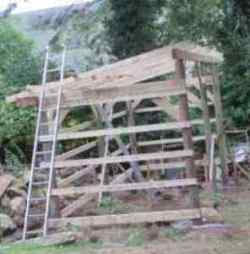 So we had 2 full-length 4x2s left on the ground when we'd installed all the horizontals - win!!. You wouldn't want to have too many of these joints in your structure but you can tolerate a couple if the length isn't too great and these weaker timbers are braced by unbroken timbers on either side. Because we were learning our trade on the hoof as we went along, we found we were measuring, cutting and installing as few as 25 timbers in a working day. But at the end of each day's work we could see progress towards the final structure. Bizarrely, while the unadorned vertical poles looked impossibly tall, especially those at the bottom of the hill; when the horizontals went up then the building [it was now recognisably a building], looked kind of squat: see [L]. We're getting ahead of ourselves with this piucture because the roof-timbers are shown and I haven't told you how we fared on that part of the project. But I think you've had enough excitement for today.
Posted by BobTheScientist at 07:34