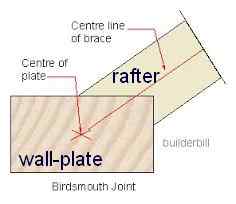 Mastering the bird's-mouth joint is an essential part of the training for roofers and house-framers. Sensible roofs have a pitch so that rain, and worse snow, don't sit on top of the structure but get thrown off before they can accumulate and start to penetrate the space below. Walls have to be vertical because roofs are heavy and it's better if the force of their weight presses straight down rather causing shear-stress. Likewise the wall-plate (the timber at the top of the wall on which the roof sits) should be horizontal so that the load is evenly distributed. The bird's-mouth is the way traditional carpenters cut the rafters (principal roof timbers) so that they sit directly on the wall-plate with maximum contact between the two faces [R showing how much of the contact area on the rafter is allocated to the vertical and horizontal faces.]. The joint is beefed up with a couple of nails whanged in at an angle from opposite edges of the rafter . . . or use screws if you're flush with money and don't trust yourself with a hammer.

On our wood-shed we had a slightly different problem in that we had two (front and back) wall plates, one higher than the other, and the roof is on a 20% slope. So instead of cutting the bird's-mouth in the end of the rafter, two notches have to be cut out of the long edge of the rafter [see schematic L - our roof is considerably shallower so the notch is flatter and less symmetrical] with a good deal of precision. The horizontal cuts have to be exactly as far apart as the wall-plates and the angle of the notch has to such that it sits exactly upon and parallel to the top of  that timber. Furthermore these two angled cuts in the rafter have to go through the wood so that the notch looks the same from each side. This is way beyond what my hand-saw skills are able for. One of the most useful things I learned in university was to point my index finger along the blade of the saw and hold the handle with only three fingers and the thumb. I was told this by a genuine chippy when I was helping to make stage flats behind the scenes at the college dramatic society. I can cut through a small timber at right angles so that the sawn face is all-square but angles are a different, more taxing, matter.

If you're been with The Blob from the beginning, you'll know that I don't consider myself a good pair of hands partly because I lack a certain painstaking logic in following protocols and partly because I'm a bit clumsy. When it comes to Materials, I've had to force myself to make and do things which I don't feel the least bit confident about. Any 11 year old farm-boy can reverse his daddy's 4x4 and trailer round a corner and into the yard without thinking. I have to school my hands and it takes 3 or 4 attempts to achieve the car-parking objective. Back in the day, when photocopiers were simpler, you could make paper-saving back-to-back copies by copying one side and feeding the copy back into the machine upside-down and back-to-front to do the second side. There are only 4 possible permutations here, but it would often take me 5 or 6 attempts to achieve the paper-saving objective.

Young Bolivar is a bit different: happy to saw and drill and screw and weld, especially if it involves something noisy like a circular saw or a strimmer. Nevertheless, he made a mistake on one of the cuts on his first rafter [R, we didn't throw the timber away but turned it upside down and had another go at getting the two cuts correct]. Purists will tsk tsk note that the shorter cut, which should be at right angles with the diagonal is actually at right angles to the edge of the rafter. You can just see the head of a 100mm screw awash with the vertical face of the rafter.

The rafters in our wood-shed were meant to be 4x2s = 100mm x 50mm on 3ft = 900mm centres and because our poles were 24 ft apart, I added 9 4x2s to the inventory.  I had duh! neglected to allow for the roof's weather-protective over-hang which meant that the roof was at least 3ft longer than the floor below. So the spacing was nearer to 1100mm than 900mm. But we stuck with 9 rafters because the odd number meant that we had one rafter in the centre sitting on top of the middle poles  and that meant that the roof was symmetrical; which turned out to be A Good Thing. To Be Continued . . .


Posted by BobTheScientist at 07:30