Blue on white are the GAA colours for Waterford. Despite a rather dubious affinity / connexion with the Déise, those colours don't really make my heart beat faster. In another context, blue and white makes my heart rather sink with a sense of dreadful foreboding: 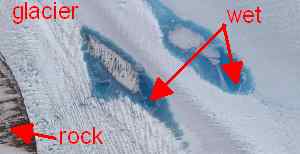 The blue bits in the picture are supraglacial lakes slopping about on the surface of the Langhovde Glacier in Queen Maud Land in Antarctica. Queen Maud Land is a huge [2.7 million sq.km] Norwegian dependency taking up a 65 degree slice of the Antarctic Cake. And the Langhovde Glacier is more or less due South of the Mozambique Channel.  The worrying thing about the lakes is that they weren't there last time anyone looked. Even in high Summer, the glacier remained so cold that the Sun couldn't melt enough of the surface for the difference to be seen from above. At the moment the lakes appear to be superficial but it's only a matter of time before the meltwater pools and then starts to exploit any small breaks and discontinuities in the ice to plunge into the depths. Here's what is happening in Greenland in many places during their Summer. Moulins are tunnelling into the ice. Liquid water on top of a glacier is one thing; liquid water under a glacier is a much more worrying situation because it will lubricate the shift of more ice downhill to calve into the open ocean. Greenland shed about 1 trillion tons of ice-water between 2011 and 2014. Antarctica holds 10x more frozen water out of the ocean than does Greenland: enough to raise sea-level by 60m. Our front gate is 230m above present sea level, so we'll be fine but there will be nowhere dry nearby to go shopping. Even ArdKeen the nearest effective hospital, perched "high" above the River Suir in Waterford, would be all totally submerged [see zoomable elevation map].

Posted by BobTheScientist at 06:49