Trust in the wooden walls

IN 480 BCE, the Great King Xerxes I of Persia invaded Greece to swat the annoying flea which was nibbling at the distant edge of his empire. Xerxes mustered a huge army which was briefly checked by Leonidas and his 300 at Thermopylae and rolled remorselessly on towards Athens. The Athenians sent a delegation to Delphi for advice. The answer came back "Fly to the ends of the earth. All is ruin for fire and headlong god of war shall bring you low."  Harrumph, the Athenians didn't fancy that as a resolution to their problems and pointedly asked the Oracle to try again. The second answer was more enigmatic but held out a smidgeon of hope: "Though all else shall be taken, Zeus, the all seeing, grants that the wooden wall only shall not fail". Themistocles aka The Mouth, argued that they should abandon the city itself [bummer!] and trust in the fleet of triremes in which Athens had invested so heavily over recent years. And it was so: the naval Battle of Salamis was fought later that Summer and the Athenians gave the Persian fleet a decisive drubbing. With command of the sea, the Athenians and their allies were able to permanently outflank the Persians and make the King of Kings go back home.

But that's all history. We too have trusted in wooden walls - specifically western red cedar Thuja plicata planks making the face and structure of our new woodshed. I took measurements and made calculations and asked Jim Davis the sawyer for 130 6x1 = 150x25mm cedar planks each 8ft = 2.4m long. On the same trip to the metropolis of Graiguecullen, I ordered all the other matériel [screws, bolts, nuts, washers, stock timber in various - 6x3, 6x2 4x2, 3x2 - dimensions] from the hardware-store / lumber-yard down the road from Jim's saw-mill. All the stuff from the latter shop was delivered the next day. The cedar took more than two weeks, so we were champing at the bit when the little truck came up the lane. As we unloaded I noticed that some of the planks were longer than others. I mentioned this to Jim and he said airily that they couldn't get so many planks out of the one log, so (of course) they were slightly different lengths. He also mentioned that John, the cutter at the mill, had thrown in some extra lengths gratis - I suppose on a baker's dozen (=13) argument against any real or perceived shortfall in the contract. 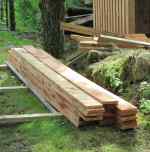 It quickly transpired that I had under-counted the inventory, not least because I'd imagined that the telephone poles would be left exposed, while Young Bolivar assumed that they would be boxed in with this beautiful new cedar cladding, so that was 8 extra planks used. When I set down to measuring and sorting the planks, I discovered that the shortest set were a full 3000mm long rather than the 2400mm asked for. So all the planks had to be trimmed a certain extent.  I'd fondly and incorrectly imagined that everything would come cut to length and we could just whack everything up [hammers and 65mm sunk-head oval nails] as quickly as we'd put on the roof sheeting. I wanted to minimise waste and useless scraps of off-cut, so it was a dilemma about whether to use the 3000mm planks or the 3190mm planks or the 3300mm planks [See L remainders after the structure complete]. This dilemma was compounded by the fact that the shortest planks were gorgeous straight knot-free, unshook lengths of timber that would be better off as a table than as shed-siding. 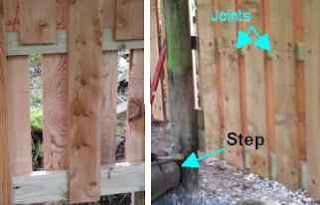 Then I realised that the spacing between the horizontal studding was such that we could make up the 8ft = 2400mm as 1600mm + 800mm and have the joint braced by a stud. That meant that we could make 3 planks cover 4 spaces [see L for pictures].  We agreed that it would be temping fate, and ingress of water to put such a joint on the outer leaf of the wall but that alternate internal strakes could incorporate a joint. And it was so: insofar as you notice the joint at all at all, it looks fine - might even enhance the authenticity. In any case, we're hoping that the lower part of the all will be most often invisible behind piles of logs from our sustainable forest.

The up-shot is that, having nailed all the cedar up, including an extra 500mm fascia at the top of the open face [see L], we have 27 unused planks including 5 lengths of the super quality stuff for a table and more than 30 off-cuts at least 900mm long which shout 'chair'. We were conflicted about the design of the fascia: should it too be hit and miss like the vertical walls or solid because we have no requirement for air circulation Up There? We compromised with the plank-gap-plank to echo the walls and cut some of the driving rain from the West.  If that lets too much rain in, we'll have to think about stapling some draft-buster plastic woven netting behind the uprights. That's all the timber installed in our new wood shed; it looks and smells gorgeous.
Posted by BobTheScientist at 06:07