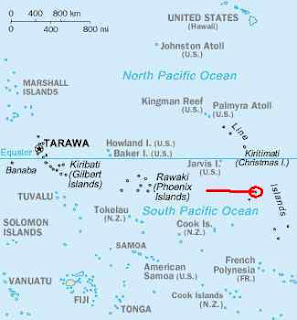 The Line Islands are a string of atolls and reefs that cross the equator - hence the Line Islands.  They extend in the NW to SE direction on the other side of the world from here in Ireland. The Northern two islands, Palmyra and Kingman reef swear allegiance to the Flag of the United States of America, as does the outlying Jarvis island.  The swearing allegiance bit is all highly metaphorical because Kingman and Jarvis are uninhabited and Palmyra Atoll supports a rolling complement of scientists and bird-watchers from 4 to 25 in number. The other islands are all part of the micro-nation of Kiribati which also incorporates part of what was the Gilbert and Ellis Islands 100 years ago. The people all live in Teraina, Tabuaeran and Kiritimati; formerly known as Washington, Fanning and Christmas Islands, further south are the uninhabited Malden, Starbuck, Caroline, Vostok and Flint. Filippo reef charted on some atlases East of Malden and Starbuck may well be a phantom island because it isn't picked up by any of the Earth-watching satellites and numerous ships have sailed straight over it. The Line Islands feature down the rightside of the map [L with Malden Island identified as a lollipop] 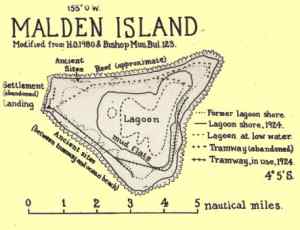 Malden Is. is, in many ways, the most interesting / intriguing of the islands because when it was 'discovered' on 30 July 1825 by Captain Byron in HMS Blonde, it was named for the navigating officer Lt Charles Malden who a) first sighted it and b) went ashore for a brief exploration.  That doesn't really have the ring of truth because the first man ashore was probably a humble rating with wet trousers holding the boat steady against the surf and the first chap to see it was probably up the mast, which a deck officer like Malden hadn't visited since he was a beardless midshipman. You have to be quite high up because, although the island is about 8km across [see map R] it is as flat as a soup-bowl with a rim of dunes not more than 10m high and much of the depressed interior is taken up by a lagoon which makes up about a third of the area inside the high-water mark.

Malden and his search party, and subsequent European visitors, were amazed to find evidence of previous habitation in the form temple-flats [L all in a heap now, more structured in times past], called marae or ahu in other parts of the Pacific as well as humbler domestic dwellings. All of these structures were in ruins but the sites showed that a group of engineers had lived on the island for a substantial time in the distant past. Perhaps the dwellers on Malden were not as sophisticated as those on Eiao or Easter Island, but they clearly had a complex social structure and economy.  The wells which appear to be contemporaneous with the above ground structures are now either dry or contaminated with sea-water. Maybe there was a more substantive fresh-water lens under the surface and its failure led to the demise of the community. Is it too wild to speculate that the people sucked the lens dry and so screwed their descendants? That would be a potent metaphor for what we are collectively doing to the whole planet.

Lots more islands and archipelagoes
Posted by BobTheScientist at 07:36