The vicar who drew 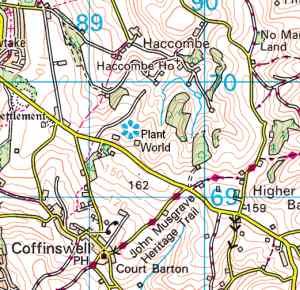 A bit more respect here, please! We treat of the Archvicar of Haccombe. Haccombe is one of the smallest parishes in the Church of England and the incumbent priest has, since 1315, the unique CoE distinction of being an Archvicar answerable only to the Archbishop of Canterbury. Where is Haccombe? Just North of Coffinswell, [see map R] another microscopic benefice both about 3km outside Newton Abbot in SE Devon. In 1921, W. Keble Martin was offered the benefice of the combined parishes of Haccombe [Archpriest] and Coffinswell [Rector] and he lived and worked there for 13 years until he was promoted to the parish of Great Torrington, in N Devon. Great Torrington is, by comparison, huge with a population of more than 5,000 people. Rector has higher status than a mere vicar because the parish supports him, while vicars get money from the diocese. I get the sense that this easy job was a reward for having paid his spiritual taxes in a series of rough urban parishes in the North of England and then serving as a padre [the title given to any man-of-the-cloth in the armed forces] in France during WWI. 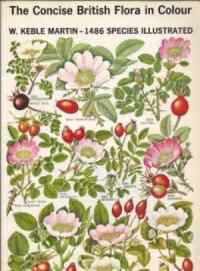 Keble Martin was not an idle sort of chap and spent every available hour hunting out ordinary and rare plants and recording their distribution. His interest in plants grew out of a youthful enthusiasm for moths when he wanted to know which plants served as food sources for his favorite lepidoptera. In 1939, he published the definitive Flora of Devon at the age of 62, as the storm clouds of WWII grew heavy with dread. You can pick this book up 2nd hand - to you, madam, a snip at £86! To record what he was looking at, Keble Martin drew each specimen, often digging up a representative plant to bring it home, but being careful to trek the thing back to its original habitat when he'd finished. In The Institute we have a debate about whether students should be required to draw what they see or just snap it with the smart-phones. If you draw, you can picking out the salient [we don't use that word, of course] features which are key to identifying the species, a photo can become just another smudge of green. otoh, a drawing can introduce an unwelcome sliver of subjectivity into the record. Drawing forces you to consider the thing you're looking at. ANNyway, Keble Martin drew and coloured beautifully and he was persuaded to publish The Concise British Flora in Colour in 1965, when he was 88! As it says on the tin [R showing the dust-jacket], this flora illustrates nearly 1500 different species, in a series of gorgeous plates each faced by a page of short paragraphs describing where you can find each represented plant and defining details of what it looks like. The drawings represented 60 years of careful observation. We used the book a few weeks ago to identify a strange plant in our hay-field:
Rinanthus minor L. Hayrattle
Less robust; branches short; leaves crenate; intercalary none; corolla 15 mm.; straight; purple teeth broader than long; lowest bract teeth less deep; Common in pastures on basic soils. Flo. May-June.
Hmmmm. We're probably wrong on that, so; because our soil is the opposite of basic. Maybe we had Rinanthus serotinus Oborny Greater Hayrattle. Better check things out next year when they are in flower again.
The Concise British Flora in Colour was a huge best seller: my father was one of 100,000 people who bought a copy 50 years ago.  That's good because the price is as low as £4 on Amazon. Make a suitable gift for any British teenager you know: get 'em off their devices and out getting their knees wet in the grass.

If you look carefully at the map [top R] you'll notice the Plant World Garden Centre exactly midway between Haccombe and Coffinswell. It's called Plant World because the 4 ac = 1.6 ha. site incorporates a floral map of the World [aerial pic]. The proprietors, Ray and Linda Brown, have made some effort to grow Asian plants in Asia and so forth, which I think is a nice conceit. If you visit, you can buy plants and seeds as well as a ploughman's lunch and a cup of coffee. But I can't find any acknowledgement of the geographic connexion with W. Keble Martin; that is a missed opportunity in my opinion.
Posted by BobTheScientist at 07:58