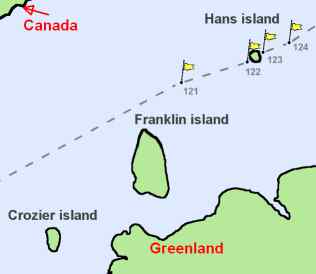 Tartupaluk!  That's the local name for a speck of rock in The Nares Channel between Greenland and Ellesmere Island currently in desultory dispute between Denmark and Canada. Greenland is a quasi-country with less than 60,000 inhabitants and enough ice to drown several other countries if it was all to melt. If Greenland sent, say, a diplomatic mission to every other country, there would be nobody left to run the country. Accordingly they delegate a lot of the dealing-with-foreigners to the Danish Government, their former colonial masters. Inuktituk is the language spoken by the few seal-hunters who venture so far North and they call the island Tartupaluk. But Ellesmere Island is indisputably part of Canada, and their government calls it Île Hans / Hans Island. The Danes prefer Hans Ø because they speak Danish. Governments need to sort out territorial sovereignty because who knows what mineral or natural resource will turn up in the neighbourhood. Tiny islands can leverage much more territory / fishing rights / mineral/oil rights if they are in the middle of the ocean.  Think Spratly Islands in the South China sea which are the subject of much posturing and shape-throwing by China [both the PRC and the other one], Philippines, Vietnam, Malaysia, and Brunei. Hans Island is more boxed in: the Nares Strait is only 35km across here, so whichever way the dispute is sorted, the 'winner' is only going to get a few sq.km of sea-bed. The loser can drill from the other side of the dotted line if there is oil down there. Nevertheless, in contrast to Franklin and Crozier Islands, which are as Greenlandy as Ellesmere is Canadian, Hans Island is perlunk in the middle of the channel. In the map [above R] the dotted line is the surveyed border between Canada and Denmark / Greenland, the flags represent triangulated agreed positions and the border jinks from this one to the next one along the strait.

But the borrrder stops between positions 122 and 123 because of the dispute. The Hans Island story just recently surfaced on the blogosphere [Metafilter to be precise] , with a certain amount of hilarity at the idea that Denmark and Canada - two of the most civilised nations on the planet - might go to war over 1.3sq.km of uninhabited rock. Periodically, one of other country will have a ship passing by and a landing-party will go ashore to raise an appropriate flag. In 1984, the Danes came ashore and left a bottle of brandy and a note saying "Velkommen til den danske ø". The Canadians replaced the brandy with some Canadian Club. That's all good fun, eh? But some commentators have pointed out that the Russian bear is getting as pushy in the Arctic as the PRC is over the Spratlys. So these two countries might be advised to settle the niggling pea, so that they agree on policy towards the bear. Of course, both countries have other important issues to occupy the attention of their diplomats: refugees, for starters.  I don't think anyone has suggested that a colony of Syrian physicians could be settled on the island as ice farmers.

Crowd sourcing democracy suggests that the Dane Have It.  If I google "Hans Island is Danish" I get substantially more hits than for "Hans Island is Canadian". YMMV, if you're googling from København you may get a different answer from your cousin in Montreal. But my answer is the same regardless of the language: Île Island Ø.