I've written a bit, and with reluctant admiration, about food engineers. The products they create may not be simple, or even wholesome, but b'god they taste good.  If they weren't tasty, they wouldn't sell and the engineer would have to go back to making roads or circuit boards. The engineers can do better if they work closely with food marketers. These are the guys who make it all sound appetising and design the packaging to give pathetic small double wrapped thing itself look generous, well proportioned and sizzling A couple of years ago, I alluded to the significant difference between Irish smoked salmon and smoked Irish salmon: the former being born in Norway.

I was interested to read about the virtues of American cheese, especially in its quintessentially correct place as part of a cheese-burger. J Kenji Lopez-Alt, the author, is managing culinary director at SeriousEats, the multi-writer food blog.  He's just launched a hard-cover book The Food Lab: Better Home Cooking Through Science which probably isn't as good as On Food and Cooking by Harold McGee which is on my Must Read Again list. But Lopez-Alt digs a bit below the surface of the hamburger-topping to tell us how the thing is made. He cuts the ground from under the feet of food nazis purists who claim that cheese is cheese and process American cheese is not. Like communion wine, all cheese is the work of human hands and so it is processed. If you leave a bowl of milk on the kitchen table, and allow nature to take its course, then cheese never results.

The US Food and Drug Administration FDA have rather precise standards and make these determine what may be claimed on the packet of food and food-like comestibles. This is a Good Thing lest the more enterprising food capitalists start to sell regurgitated condensed bee vomit as 'honey'. Whoa! They do that already? I knew I was safer with Lyle's Golden Syrup - less Listeria and makes way better flapjacks, Thanks to the officious ministrations of the FDA, these things are different: 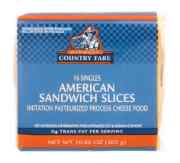 Ironically, adding the word 'food' to the definitions above allows the inclusion of a higher proportion of things not normally recognised as food. The FDA is as American as apple pie and no patriotic American is going to consume foreign stuff produced by, for example, cheese-eating surrender monkeys. Therefore the word American is sort of hanging invisibly before the word cheese as in Pasteurized Process American Cheese Spread. Accordingly concoctions like American Sandwich Slices [see package R] are FDA-labelled as
Where the cloak of invisible implication has shifted to Pasteurized Process American Cheese Slices. These things contain no cheese, process or otherwise, but are a cunning mix of oil, water and emulsifiers. No, its worse than that: like Benecol, the first ingredient is water:  Water, food starch, partially hydrogenated soybean oil, modified food starch, milk protein concentrate, salt, natural flavor, sodium phosphate, stabilizer (xanthan, locust bean, guar gums), sorbic acid (as a preservative), lactic acid, artificial color. As Lopez -Alt charitably puts it, Sandwich Slices attempt to "mimic the meltability and flavor of actual American cheese. They do a pretty poor job at both".


via, as often, Metafilter, where, as often,
the commentary is worth skimming
Posted by BobTheScientist at 07:25