Last night was Third Tuesday so it was Wexford Science Café night.  Last month we had a very interesting and informative presentation from Denis Shannon, organic farmer, about the low input, great output way he runs his small-holding.  It's all about the microbes, stupid!  By looking at and living with his fields over nearly 20 years, he knows each low patch and subterranean boulder and remembers exactly where he dropped and spread a load of farm-yard manure 3 years ago. That will be ready for carrots this Spring. His knowledge of his clods is like James Rebanks' knowledge of his ewes, which is to say near omniscient. In neither case are their sources of income generic 'units' that can be safely treated as equivalent. Larger, more affluent, more 'modern' farmers haven't got the time for that and horse out fertiliser in quantities across the fields so that, on average, they hope to get the dose correct. And because, for these new-magnates, time is money and fertiliser is artificially cheap [VAT-free in Ireland!], there is a tendency to throw a little extra out of the hopper for luck. Extra fertiliser destroys the ecological balance in water-courses as it runs off the fields and boosts the growth of oxygen-depleting algae.

We can, from our city sofas, take the high moral ground on this over breakfast (that's why we try to get The Blob out early each morning) and then retire to the bathroom to ease ourselves. A quick sit, a quick shit, and 12 litres of fecally contaminated water is sent off-site.  Not so smug now, city-boy?  We're not all like this, even in the West.  A vanishingly small cohort of out-theres are engaged with their outputs the same way  as Denis and James are engaged with their inputs. When we moved into the farrrm in 1996, we found no flush-toilet, indeed we found no running water except that which trickled down the drain beside the lane up to the house.  Old Ray, the previous incumbent, did his business in various corners of the fields, presumably in the lee of a hedge if it was driving rain. If every bucket of water had to be carried from the spring, he wasn't about to contaminate one with coliform. He died and we bought, and he was almost the last of a dying breed: there are very few homes in Ireland today that don't have indoor sanitation.  That's progress. 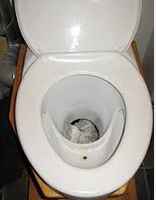 But is it? The presenter last night at the Science Café had questioned the assumptions behind this normality and come up with another solution. When Chris Hayes moved into his grandfather's place ten years ago there was a septic tank and a crappy drain-field and a flush-toilet but he revolted at the idea of contaminating 2 gallons of hard-won potable water every time one of his children 'went'.  After thinking about it, he put off his philosopher's hat, seized his carpenter's saw and built a comfortable and seemly frame round a sturdy 20 liter bucket in a corner of the bathroom. Cost €28. Over the last decade, three times a week, he has carried a full bucket off to a 'humanure' compost heap, covered the contents with straw, given the bucket a rinse and returned it to station. That's a whole lot of bucket!  His calculations indicate that he has carried 18,000 lts of waste, weighing perhaps 10 tons, to the compost heaps at the bottom of the haggard.  That's a lot of honest exercise. This last month, however, after more reflection on the contents of the bucket revealed that 2/3 of if was (sterile) urine, he's parked the old system and installed a urine separating toilet [R above] at a cost of €800 [!?].  His arrangement is a teeny bit more complex than the picture but not by much. Sitting on the seat swings opens a door above the larger hole and advances the collecting tray one notch. There is a mini-voltage electric fan which evacuates any smells and also dries out the stool. This handily reduces the weight that has, eventually, to be schlepped off to the compost system.  The bucket still has to be emptied but now only thrice a month rather than thrice a week. The urine is diverted to a drain lined with alder and willow that will grow taller faster with the nitrogenous boost. Alder Alnus glutinosa is the wood of choice for making seats for saunas and willow Salix spp. makes baskets.  You have to exercise a little caution here because although urine is rich in [growth-rate limiting] nitrogen it is also rich in salt.

We were well impressed, in a good for you + glad it's not me way. But the question we asked was: who is in the market for a such a clever piece of engineering.  With Chris's original system, the kit was all generic: planks, screws, paint, tiles, grout, bucket but I can't just now think of an alternative use for a separating toilet bowl - it's too big for a hat.  If someone is making them and someone else is selling, who in heck is buying?  Where is the market?  Surprisingly extensive . . . and growing. Not only for building-sites and pop-festivals but increasingly as the most economical solution in new-build houses under draconian [and not before time] regulations for the safe and sustainable disposal of human waste. Safe disposal brought to mind some home-eddy friends of ours in West Cork, who had a bucket in the bathroom system but whose bathroom was upstairs.  All went well for many years until the fear an tí stumbled at the top of the stairs and delivered a full bucket explosively to the hallway below.

It's not all or nothing.  As Ireland moves into metered water, and we effectively have to pay for each drop, more of us are going to be less thoughtless with the flush-handle.  In 1998, we had a huge party and needed to cosset our toilet a bit.  We put a sign [not original to us!] up saying "If it's yellow, let it mellow. If it's brown, flush it down."  It was too much for some of our guests to break the habit of a lifetime, but some obeyed the instruction and nobody died.
Posted by BobTheScientist at 09:26