The chemistry of armour

A few days ago, I was on about Abraham Wald and his insight as to where to place the armour on planes.  Wald came originally from Kolozsvár, Hungary [now Cluj Romania] and added to the rumour that Hungarians had shipped in from Mars to help the Allies with the war-effort.  Where to place the armour was certainly one part of the equation - no advantage in having the windows of the cockpit or a ship's bridge covered with a layer a steel. So in the great naval arms race of the 40 years bracketting 1900, a lot of thought was put into which parts of the ship to protect with the most armour: the hull particularly at and just below the waterline; the "vital parts" engine rooms and bridge; the guns to maintain offensive capability. In the minutes or hours of a battle, you can manage without a functioning galley and mess-deck and if the t'ilets are destroyed there are always buckets or the leeward side. In the days of coal-fired engines, the coal bunkers were often placed on the outside edge of the hull in two parallel water-tight lines. The coal would effectively absorb much of the energy of an incommming and the inner bunkers would continue to supply dry coal until things quietened down.

In the days of sail, the battleships of the day were protected by hearts of oak [cue rousing song!] which would stop the existing 24lb 150mm calibre round-shot but unleash a devastating spall [technical term] of wooden splinters from the opposite [in]side - the energy has to go somewhere. As sail yielded place to steam, wooden walls were supplemented with a layer of wrought-iron to spread and dissipate the energy of the projectile and the word ironclad was coined. As the tropical colonies were exploited, it was found that teak Tectona grandis was more effective than oak and this became the material of choice under the outer skin of rivetted iron plates. It soon became apparent to armorers and metallurgists that steel was more effective than teak in taking a hit and better still if it was made in layered plates. Compound steel had a very hard but brittle outside and a more elastic thicker inner layer. The two leaves were lined up in the foundry and molten steel poured into the gap to weld them together.  This was a poor solution in practice because under the impact of  powerful enough projectiles the layers would separate at their abrupt transition and the brittle outer layer would shatter off in chunks. 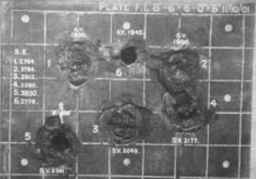 Enter Hayward Augustus Harvey of Orange NJ who invented case-hardened steel.  Regular steel was produced in sheets of appropriate size, covered in a thick layer of charcoal and returned to the furnace for two or three weeks (frightening carbon foot-print here, of course, but that hadn't been invented back then).  The carbon in the charcoal would penetrate the iron to the depth of 2-3 cm (the case) so that at the surface it was 1% carbon decreasing steadily so that 3cm in it was only 0.2%.  That was the solution of the 1880s. Ballistic testing [see R] suggested that Harvey steel was about 18% better than compound steel, requiring less material for the same protective power, and it was adopted by all the navies of the world.  Ballistic testing involved whanging a projectile of set mass against a plate of the material and increasing the velocity until failure occurred.

The balance of technological power shifted markedly back to Europe when Krupp Gussstahlfabrik [cast steel factory] in Essen started tricking about with the molecular make-up of their steel, adding 1% chromium to the standard iron+nickel mix.  Krupp also stopped piffling about at the surface of the steel by blasting carbon-rich gas through the molten metal to increase the depth of carbon 'cementation'.  In 1893, Krupp armour was released to the grateful ranks of warmongers from across the globe.  The company used to lay on Völkerschiessen [public shoots] destructive testing shows at the Krupp proving ground at Meppen near the Dutch border. The company had more than 40 governments on their order books and sold thousands of cannon and thousands of tons of armour plate: they made both and the demand for their conflicting products helped a) crank up the arms race b) employ thousands of workers in their several plants.  The Krupp family were notable for their paternalistic company town work ethic. In exchange for an oath of loyalty, rejection of unions and hard work, they really looked after their workers; providing homes, bath-houses, recreation parks, educational opportunities and sick-and-accident benefit for their workers and dependents.  Their reputation in WWII is rather less rosy, that's another, later, story.

Krupp's chemists also invented the steel of choice for the 1900 noughties: KCA: Krupps Cemented Armour.  This mobilised half the periodic table - carbon 0.35%, nickel 3.9%, chromium 2%, manganese 0.35%, silicon 0.07%, phosphorus 0.025%, sulfur 0.02%. - and was no stronger than the Krupp Armour of the previous century but had significantly better properties, as to spalling, in an extended pounding match. Krupp sold a helluva a lot of this material in the run up to WWI.  The obsolescence of material "1% chromium? - so yesterday my good sir" is a recipe for happy shareholders - all of whom were called Krupp.

Protection from projectiles has become much more elegant and light-weight since the invention of Kevlar by Stephanie Kwolek, whose chemical invention made billions of $$$ for DuPont - another company with a somewhat murky record from WWII.
Posted by BobTheScientist at 06:12