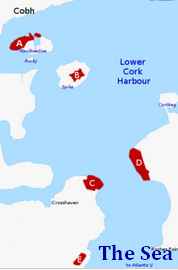 Spike Island (Ir. Inis Píc) [L marked B] is in the middle of the complex water-feature known as Cork Harbour.  The city of Cork, however, lies at the extreme Western end of one of the winkly inlets and bays.  In the good-old bad-old days before independence it was known as Queenstown Harbour which is more consistent with geography: Queenstown being what we now call Cobh which looks directly out across the Harbour at the wild Atlantic.  The other bits identified in red are the fragments of infrastructure which constituted one of the "Irish Treaty Ports". The Treaty Ports were one of the results of the negotiations that brought an end to the bloody internecine Irish War of Independence Cogadh na Saoirse in 1921 (truce 11th July, Treaty 6th December). Unrestricted submarine warfare of WWI was still raw in the minds of the British negotiators and the idea of retreating Coastal Defenses 300 km East to Pembroke Dock [previously] in SW Wales was too painful to contemplate. 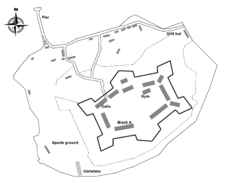 So they retained the use of the naval infrastructure at "Queenstown" which meant the dockyard facilities and barracks on Haulbowline Island [A], Spike Island, of which we treat, the two defensive installations that face each other across the harbour-mouth Fort Camden [C] and Fort Carlisle [D] and the batteries at Templebreedy [E] which have 180 degree views of potential incoming.  You can see from the sketch of Spike Island [L] that it too had a fort: named after Lord Lieutenant (1789-1794) The Earl of Westmoreland.  All these forts have been renamed after Irish patriots since the Irish Free State / Saorstát Éireann became a republic.  The ceremonial handover of Queenstown was scheduled for 11th July 1938 and the event went off without a hitch: flag down, flag up, salutes, gunfire. The clear demilitarisation of Ireland was essential for de Valera's plan for neutrality in the upcoming conflict - the Anschluß Österreichs had happened in March, the Sudetenland was seized in October. The loss of the Treaty Ports was seen as a huge betrayal and folly by Winston Churchill.

Fort Westmoreland was conceived at the height of the Napoleonic Wars and building commenced in 1804.  Construction was still ongoing when The Emperor was sent finally to St Helena and the peace-time exchequer didn't pull the plug on the stone-masons until 1820. In 1847, after two years of potato famine and a spike in convictions for stealing sheep and loaves of bread, Spike was used as a holding station for convicts awaiting transportation to Van Dieman's Land.  While waiting they were put to work building both on Spike Island and on neighbouring Haulbowline / Inis Sionnach, between the two of which a temporary wooden bridge was constructed.  Hundreds of them died, mostly in the first decade of the existence of the institution and are buried on the island. It's not a great deal different from either Ellis Island or Grosse-Île which handled more dead Irish people at about the same time.  Spike Island prison was closed finally in 1883 and the place was turned over to the military again.  UCC Archaeology Department has spent the last several Summers with trowels and paintbrushes digging down into the history of the place and presumably have turned up buckets and buckets of clay-pipe fragments as well as buttons, coins and a lot of dead bodies. The project director Dr. Barra Ó Donnabháin has a particular interest/expertise in the dead bodies and making sense of who they were and how they died.  They're at it in the drizzle even now.  If you want to volunteer you can sign up through UCC's partner the Institute for Field Research, which will charge you $4,850 for six weeks of bed, board and getting down and dirty with the dead.