At around the turn of the century, we were living in a small farrrm on the side of a mountain but I was working in Dublin.  It seemed sensible to have somewhere to stay in The Smoke and so I rented a civilised [kitchen, bathroom, living-room, parking] one-bed apartment in Dublin 4 and spent 3 or 4 nights there each week.  It cost £320 pcm in those far-off pre-€uro days. Then I negotiated a 20% decrease in pay in order to avoid the dreadful Friday weekend exodus and a couple of months later the landlord hiked the rent 28% and having my own place in town was no longer tenable. I threw in my lot with two long-haired botanists, both from England, and a long-haired cat from who-knows-where and stayed there Mo Tu We nights. Wednesday was the highpoint of the week as we sat in a row on the hairy sofa watching The Big Match out-doing each other with outragenglish puns on the names of the players and barracking the referee for his blindness. 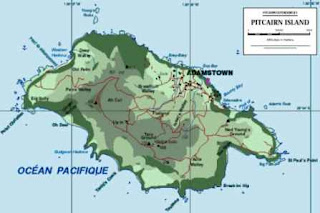 One of the bots was the world's expert on the flora of Pitcairn Island and we got a months long blow-by-blow of his cunning plan to deliver a graduate student to Pitcairn for an extensive sojourn of field-work.  The paper-work was mountainous and the logistics formidable. A flight to Tahiti with Air France, then a short-hop [1600km!] to Mangareva in French Polynesia then a 32 hour boat-trip by schooner; finally landing through the surf in a long-boat. I think the deal was that he either spent 30 hours on Pitcairn or 30 days and he was anxious about missing his return trip. Yes, indeedy, Pitcairn is remote: 130oW, 24oS. So remote that it wasn't discovered by Europeans until Philip Carteret, Seigneur of Trinity in Jersey and a British naval captain, sailed by on 3rd July 1767.  The island was first sighted by an eagle-eyed Midshipman called Robert Pitcairn and named for him.  In 1790, famously, the mutineers (N=9) of HMS Bounty abandoned Charles Laughton , Trevor Howard Cap'n Bligh and settled on Pitcairn with some slaves Polynesian adventurers N=M6;F9+1child].  The wreck of the scuttled Bounty can still be seen on the seabed at Bounty Bay.

In contrast to the children of the Prague Kindertransporten, the Pitcairn Islanders have not gone viral, with the population bombling along [between N=200 and N=40] on the lower edge of what makes a community sustainable. St Kilda was after all depopulated by the British government in 1930 when its population sank to 3 dozen and didn't show any sign of increasing. It needs several adult men to manage the surf-boats by which all supplies are landed.  With 20/20 hindsight, in 2001 my botanical colleague might have thought twice about the advisability of abandoning a young woman in his care to several months alone in remoter valleys of this remote place. In 2004, a third of the adult males, all cousins, were convicted of shagging females of any age and any state of willingness or consanguinity.  This despite that fact that everyone is a Seventh Day Adventist since a successful mission there in the 1890s.

The government of Pitcairn is now trying to recruit immigrants.  But, no more than the Brits in 1939, they don't want any riff-raff. They will give you a free site to build a home . . . provided:
Since the scheme was opened in 2013, there have been 700 expressions of interest but only a single application to settle in this tropical paradise.  Could be for you?

Posted by BobTheScientist at 09:27