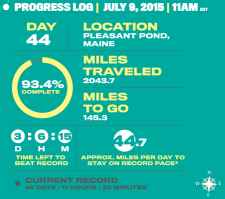 A couple of unrelated updates:
I checked into Scott Jurek' s slog up the Appalachian Trail last night and found [R for data] that his quest to snatch the "fastest passage along the AT" baton from Jennifer Pharr Davis hasn't been completed in 42 days (last Tuesday).  On the contrary, as Wellington said of Waterloo "It has been a damned nice thing — the nearest run thing you ever saw in your life".  Round about the time I'll be ready for bed on Sunday night and folks on the East Coast will be sitting down for tea, the deadline for for record will pass.  Just under three days out, he's looking at having to run 45 miles a day which doesn't leave time for tea and energy bars let alone shin-splints or a torn tendon.  I watched Jennifer's report to National Geographic [24mins] that her record breaking run in 2011 was her third time down the trail.  She prefers to go the 'wrong' way from Maine to Springer Mountain.  Last night Dau.II and I watched a documentary about the 2014 crop of thru-hikers on the AT.  It was useful in that I am now agreed with myself that I don't need to do the Trail before I die. Dau.II went to bed before the hour was over after making several snarky comments about white kids playing wannabe rappers with their 'trail-names' and their relentless quest for free food, lomotil and 'shrooms. Lomotil makes you realise that, like the approaches to Everest, the once potable water in the Appalachian wilderness is being steadily contaminated with coliforms and Giardia, as all these goddam hikers loosen up: six months on the trots indeed.

Last year, I acknowledged that today, 10th July, is recognised by followers of Meher Baba as Silence Day with 24 hours without chatter. He's photographed with Tallula Bankhead in Hollywood in the 1930s [L]. The guru spoke for the last time on 9th July 1925 and woke up on this day 90 years ago calling for a wooden alphabet board with which he could spell out the words he was now refusing to speak.  He wasn't going to speak again until he had something significant to say.  Despite several promises that he would break silence at a specified time - in The Hollywood Bowl in 1934, for one example - he died in 1969 without ever feeling that the time was right.  This inspired Pete Townshend of The Who to write his pop-opera Tommy about the the " . . . deaf, dumb and blind kid, sure plays a mean pin-ball".  Meher's catchy quote "Don't worry, be happy" was taken up by the incomparable Bobby McFerrin.  But if you're going to spend 24 hours with your gob shut, you might tune in to Pharrell Williams 24 hours of Happy video which cleverly recognises what time of day it is for you and starts there.
Posted by BobTheScientist at 08:12