Look the evidence in the eye

In deciding Glossip et al. v. Gross et al. [PDF 127 pages] on 29 June 2015, the Supreme Court has found, again, that the death penalty as currently implemented in, say, Oklahoma is not a cruel and unusual punishment. The majority (it's 5:4 again) opinion starts with a rather ambiguous statement "Because capital punishment is constitutional, there must be a constitutional means of carrying it out".  The ambiguity hinges on 'must' which could mean that allowing CP is a purely theoretic construct unless the several States and their death-techs can find a method that is also constitutionally sound OR it could be read as because CP is constitutional there has to be out there a method by which it can be carried out.  It's a burden of proof thang: in the first interpretation there may not be any method of which the imagination of man can dream which is not repugnant to the Constitution.

The process is so replete with double-speak and hypocrisy that George Orwell could have written it. When Clayton Lockett was offed in April 2014, they draped his exposed genitals with a towel in the interests of [his?] 'dignity' thereby hiding a technical disaster that was going on with the IV [not] inserted into his femoral vein. Probably the draping was to protect the sensibilities of the observers - Americans are far more prudish at the exposure of [male] genitals than, say, Germans with their freikörperkultur who are easier with a sight of the uglies [cue Des Bishop].  And what are the families of the victims doing the other side of a glass wall? If the death penalty is the final sanction to tidy up people whom we don't want to have on the planet anymore than victims don't have a locus standi.  And ditto with victim impact statements: you may be able to articulate your grief better than me but that doesn't make your pain worse than mine and therefore it shouldn't affect the sentencing. If doesn't affect the sentencing it has no place in court but may by all means be given on the court house steps. 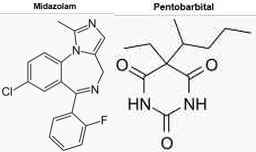 The SCOTUS judgment last week hinged on whether midazolam was capable of inducing a coma so deep that the paralytic and KCl which come after, and are acknowledged to be painful and distressing, cannot be felt by the departing perp. When death by lethal injection was brought in to replace [constitutionally repugnant] hanging, electric chair and gas chamber, the drug of choice was pentobarbital, a barbiturate which seemed to do the trick.  Indeed it will do the trick on its own if euthanasia is deemed desirable.  Then the Danish manufacturers of Nembutal the barbiturate of choice refused to supply the drug if it was to be used for CP.  So the thanatotechs, primarily in Florida, cast about and started using another class of drug: benzodiazepines in particular one called midazolam which is marketed by Hoffmann La Roche as Dormicum/Hypnovel/Versed: which should give you the consumer a clue about what are its effects.  But lookit [L above], midazolam doesn't look a bit like pentobarbital! And its effects are pharmacologically quite different although perhaps superficially the same - zzzzzzz.

The law as practiced in the US, and in Ireland, is inherited from English jurisprudence which effectively descends from trial by combat.  The judge and jury act as impartial listeners to arguments by the two opposing sides. The team that offers the best arguments in this 'adversarial' system is deemed to have won. There is no need to achieve such nebulous concepts justice or fairness or truth. The inequity and iniquity of this system is borne out by the fact that the deeper pockets can hire the best players on the court's stage and so Megacorp usually trounces Joe Employee.  Continental systems rather have a bench of judges who try to winkle out the facts and interpret them according to their legal experience. Judges as impartial is also called into question when their individual prejudice is well known, statistically supported and predictable enough to bet on.

In the end Justice Alito claimed it was up to the poor, black, dispossessed, death row inmates to come up with a better alternative. Until then midazolam would have to do [because death row was filling faster than it could be emptied?]. The best defense of this drug of choice was so bereft of evidence that would satisfy, say, a scientist as to be a mere anecdote. According to the same source, [which shd be salt-pinched because they can't be bothered to spell midazolam/midazalom consistently] the company which bottles the drug has requested and required Oklahoma to return all their purchased supplies [R Akorn gets conscience] because it is not fit for that [fell] purpose.  There is a niche market here.  Surely there's a little chemical company in Tallahassee or Tulsa which is capable of making a suitable barbiturate and selling each dose for $10,000, all legal of course.

The idea, implied by Alito's reasoning, of  à la carte death penalty being extended from the macabre charade of a last meal [extra fries and really big bowl of ice-cream please] is compelling. "Sheeeut, I'm not going like Clayton, Governor, I've made me a noose in the machine-shop". Then if it all goes horribly wrong, everyone can blame the victim. No surprises there.

Are you still there?  This is getting drawn out . . . but I have two more end-of-life points to make from items that have been circulating on the blogosphere recently. Back in the days of the Cold War, the USSAR had to make sure that the red button wasn't pushed on a whim.  A suggestion was made that the POTUS should be accompanied at all times by a personable young naval officer who had volunteered to have the Codes for Armageddon placed on a ceramic chip close to his heart: link TYWKIWDBI. Before the Supreme Leader of the Free World could wipe out the million inhabitants of Красноярск [Krasnoyarsk] he'd have to rip open the chest of a nice boy from Annapolis like an Aztec priest-king. Try a bit of judicial killing yourself Mr Justice Alito et al.? Indeed, the sanitisation of judicial killing is making it much easier to accept by civilised people. A case could be made for bringing back public executions and forbidding attendance by anyone who wants to be there. You'd get a summons like for jury duty. And yes, the same rules of engagement could apply for those of us who eat meat.  If you want lamb chops you should at least once whack the sheep to qualify.

4th July was the 39th anniversary of Operation Entebbe. A week before, the PLO with help from a couple of German radicals had hijacked the Air France flight from Tel Aviv to Paris via Athens.  They finished up in Uganda having been welcomed by Idi "Bonkers" Amin the Ugandan President. One of the passengers, an elderly Israeli woman with a UK passport called Dora Bloch, fell ill and was taken to hospital in Kampala for treatment. With extraordinary logistical efficiency and daring the Israeli Defense Forces IDF put together and executed a rescue plan which involved landing four C-130 Hercules transports in the middle of the night at Entebbe airport in a surprise attack. 100 Israeli commandos burst into the airport building where the hostages were held, shooting all the hijackers and a few dozen Ugandan soldiers who returned fire (and three hostages who stood up when told to lie down). They refueled, disabled all the MIG fighters on the ground, bundled the hostages into the planes and returned home via Kenya. The whole operation was over in less than an hour.  Mrs Bloch was murdered later in her hospital bed. The humanitarian gesture had unintended and fatal consequences. There were also fatal consequences for a few hundred Kenyans who happened to be in Uganda but none of them were white, so none of them have names.


Posted by BobTheScientist at 06:03