Today is a significant anniversary: 200 years since The Emperor Napoleon surrendered to Frederick Lewis Maitland, Captain of HMS Bellerophon [R from a contemporary print]. Bellerophon was affectionately known in the Royal Navy as the Billy Ruffian. 15th July is the day after the French Revolutionary festival of Bastille Day. After defeat at Waterloo on 18th June 1815, Napoleon retreated to Paris but The Establishment was was in the process of wrapping up two decades of war with the restoration of the Bourbons.  Napoleon was advised to seek asylum in America and headed for Rochefort on the West coast of France in hope of securing passage to the Enduring Republic on the other side of the Atlantic.  Various cunning, but undignified, plans were hatched to evade the British blockade, including secreting the Emperor of the French in a barrel aboard a Danish vessel.  At least one American ship was in port at the time which would naturally have been subject to intense scrutiny. Prussian and Austrian troops in France were under orders to capture him dead-or-alive and Napoleon was running out time and options. Accordingly he opened negotiations with Captain Maitland about securing passage to America.  As Maitland's orders explicitly commanded him to prevent this, Le Grand Fromage eventually agreed to surrender to Maitland and treat for asylum in England.  He came aboard on the morning of the 15th with a party of 33 (!) including 5 generals, 4 children, 7 valets and a chef called La Fosse, and Bellerophon immediately set sail for Plymouth. 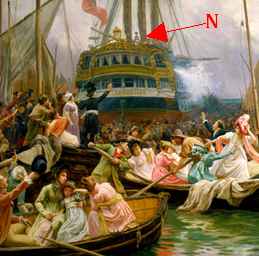 In those days, Napoleon was demonised to about the same extent as Hitler was in WWII: nannies would threaten naughty children with "Boney will take you" as a sort of boogie-man.  This did not stop, indeed it doubtless encouraged, the Great British Public to treat the arrival of Napoleon in Plymouth Sound as a huge raree show [L]. Maitland was under strict orders to prevent anyone boarding the Bellerophon but he could not stop every scow, pram, wherry and cutter in port from loading up with passengers for a glimpse of the Emperor. Bit of a lottery, I guess, like going out to whale-watch, spending several hours at sea, heaving up and down and heaving up your dinner and finding no whales.  Note the girl in pale blue in the foreground who has swooned from the excitement.  After a couple of weeks, Maitland was ordered to make sail again and transfer his guest to HMS Northumberland which was properly victualled to ship Napoleon to the remote outpost of St Helena in the South Atlantic.  He died there 5th May 1821, possibly from arsenic poisoning, but that's another story.