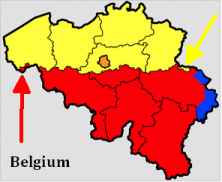 Belgium is a country in the same sense that the USA and the UK are countries but sometimes you'd find this hard to believe.  You see [L] that the map of Belgium has three colours based on the language spoken by the majority of inhabitant is each community. Flanders in the North where they speak Vlaams - a dialect of Netherlandish [yellow]; Wallonia in the South where they speak French [red] and two separate fragments along the Eastern border where they speak a variety 'Hochdeutsche' German [blue]. Brussels is orange because they've agreed that the capital is going to be bilingual.  Me being me, I cued in on the oddities in the map which I have highlighted with a couple of big arrows. There is a fragment of Flanders surrounded by red in the East and, for balance, a slip of Wallonia surrounded by yellow on the other side of the country.

In the East lies Voeren, a village known by part of the populace as 's-Gravenvoeren and as Fourons-la-comte by some other inhabitants. I've zoomed in to the relevant part of the map, which also includes Baarle, a town split between two countries of which the Belgian enclave is entirely surrounded by the Netherlands. I've been to Baarle and so has The Blob. The situation is more complex than a bit of Belgium entirely surrounded by Orange but not as complex as Cooch-Behar in the sub-continent.  The plum-coloured lump on this map [L] is the Belgian province of Limburg and the peninsula marked NL is the Dutch province of Limburg and the red bit under the NL is Voeren.  It would all have been simpler if the historic Duchy of Limburg could have been kept under a single jurisdiction.  But in fact the Duchy of Limburg was a totally artificial madey-uppy construct imposed on the local people by the occupation forces of revolutionary France at the beginning of the 19thC.  They wanted to call it Meuse-Inférieure, a département of Greater France a little downstream from le département Meuse which has "55" number-plates. King Willem I, however, insisted that the medieval Dutch-sounding name be used. The revolution of 1830 created a mostly Catholic predominantly Francophone country called Belgium and under the Treaty of London 1839, Limburg was divided between the two countries of Belgium and Netherlands. The detached fragment of Southern Limburg was added to the province of Liège for administrative convenience. With even that much historical background, the enclaveness of Voeren begins to look a little more ordinary. The Francophoneness of Belgium was much less certain or complete than successive Kings of the Belgians would like to have believed and Belgian political history has been dogged by factions obsessively picking at the scabs of linguistic heritage ever since.

In Ireland we compel all state-employees (teachers, police, judges) to be 'fluent' in Irish, so that if someone, wherever they live from Achill to Wexford, needs services in Irish they can be accommodated. This option was briefly entertained in Belgium. But Flemish-speakers generally seemed to be able to retain sufficient French from school to communicate with their neighbours. French OTOH was, from the foundation of the state. the language of The Man and The Establishment often couldn't be bothered to learn the language of the Flemish proles. Does this remind you of Kashmir? ANNyway, the territoriality principal was adopted instead.  This said that the official language of each region would be that which was spoken by the majority. You have to petition for services if you are of the minority in your area and if you can muster a quorum - 16 parents can petition for their children to be taught in the language they speak at home. The territoriality principal is full of pride, exclusion and inconvenience . . . although it saves taxpayers money with monoglot roads-signs. We got lost the first time we drove through Belgium because we didn't recognise that Anvers, which was all that appeared on road-signs in Wallonia, was the same as Antwerpen where we were headed.

100 years after the establishment of Belgium, the government felt the need to firm up the linguistic border that cut the country in half like a weeping sore. In 1932, the 1930 census data for all the municipalities along the lingoborder were consulted on the question "What language do you speak at home?" with allowable answers Français, Vlaams or Deutsch.  The people in Voeren spoke Limburgish which was Vlaams in the sense that Frisian is Dutch: i.e. not very much. But given only three choices, and allowing for self-declaration, the data came out clearly in favour of "Vlaams" being the dominant language in the area.
It was, accordingly, treated as a Flemish community with language concessions for French rather than a French community with language concessions for Flemings. There were red faces all round when the 1947 census results came in 15 years later, which showed that a lot of the Flemish speakers had moved, or more likely died, and they had been replaced with so many Francophones that the language balance had see-sawed the other way.  These things are taken very seriously in Belgium and the potentially explosive results were kept under wraps for another 6 years. The six little villages were added, or restored, to Limburg in 1963 and merged into the Uber-community of Voeren in 1977. The very idea that a sliver of Flanders was being subsumed by Wallonia, or v.v., raises strident thin-end-of-wedge end-of-our-heritage questions in parliament. Although there have been violent demonstrations in the past, currently the war consists of slipping out at night and using a spray can to obliterate words on road-signs which you and your pals deem to be offensive.  In 1999, an EU regulation determined that 'foreigners' could vote in local elections.  As a lot of [genuine, orange-underpants] Dutch people live in Voeren and commute to work in Maastricht, their contribution was decisive in restoring the balance of power to the Vlaamspreken Voerbelangen party at the expense of the predominantly French-speaking Retour à Liège party.  Really, you'd think that people would find more important things to be exercised about: malaria, climate change, the end of the eurozone  . . . but then I would say that - I'm white, male and speak English like a native. I'd probably be chronically pissed off if WWI or WWII had gone the other way and I had to apply for a driving licence by filling in a form in German or Russian.

But we can all agree that Belgians, whatever they speak, make the best fries.
Posted by BobTheScientist at 07:18