. . . v. trans: to become accustomed and attached to an area of upland pasture.  I've just finished reading The Shepherd's Life: a tale of the Lake District by James Rebanks [kindle] in which heft is the key concept both for the sheep and for Rebanks' people, who are all buried in the Lake District going back hundreds of years.  His is an extraordinary story.  The book is told as a series of vignettes building a picture of a little tyke who idolises his grandad and follows him around the farm learning by imitation.  All he wants to do is raise sheep like his father and grandfather are doing. His grandfather can remember in which field each of his adult ewes was born and their entire cousinage in the same way that Louis Agassiz knew every beetle in his back yard. When young James gets to secondary school he drops out; unable, despite a bookish mother, to see any value in things that aren't directly related to the farm and their narrow way of life.  As you read, a disconnect develops as to how a functionally illiterate youth can have developed into the author of this well-crafted and easily-read investigation of the nature of work, the importance of family and, of course, sheep - lots and lots of sheep. 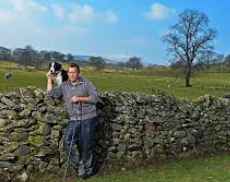 About halfway through, it emerges that, in his early 20s, he meets the love of his life in the next village and goes back to school at night. Turns out that, despite is best endeavours, he's not a thicko and he drives himself to pass his "A" levels at about the same time as his much young sisters are sitting theirs. He has an authentic voice, so rare under the homogenising massage that is regular school, which stuns the teachers at the adult education college in which he is enrolled.  A bit like Richard Burton of the beautiful voice being discovered in a coal-mining village in South Wales. Rebanks' teachers suggest that he could/should apply to Oxbridge.  By getting into a barney with one of the professors on the Oxford interview panel he secures a place on their history course. He can write books because he's read a lot of them and thought about how they are constructed and whether they work or not.  Effectively, he is self-educated.  Usually the acquisition of an education is an essential step in a plan to escape from the drudgery of a working-class existence to a desk-job that is better paid and less physically demanding.  But here again James Rebanks bucks the trend: having spent half a dozen years "getting an education" he uses it to come back home to the family farm and raise another generation of imitative shepherds-in-the-making. The part-time job he secures - with his hard-won skills in history and journalism - is working as conservation consultant for UNESCO. You get an image of Mr Rebanks prone in a wet meadow with one hand untangling tiny legs deep inside a sheep while the other hand is holding a smart-phone and talking about the ruins in Çatalhöyük. You'd have to secure that other job because the average annual income for a shepherd is something like £8,500 which is way below the minimum wage and probably meets any EU definition of poverty. But it is, au contraire, a remarkably rich and satisfying life where the children are requested and required to contribute to the work of the farm as soon as they can carry a bucket.

A flavour of the life is captured by the BBC and in the promo for the book by Penguin [persistent wind alert].  If this all reminds you of the later life of Beatrix Potter, it should.  She had a special grá for Herdwick sheep and specified that the thousands of hectares she left to the National Trust should be grazed by Herdwicks as an essential, necessary, part of the landscape. A landscape which has indeed been created by the grazing of sheep over the upland fells since the Romans marched past on their way to Hadrian's Wall.

Links: review in NYT; essay in The Atlantic about the shepherd wot tweets; the Grauniad; review in the Reactograph.

Posted by BobTheScientist at 06:06