The Sons of Papa

Well, and like, sure all those who identify as male are the son of some Papa, even if many of us are not the children of the declared parent. Today we treat of a peculiar group of schismatics centred on Papa Stronsay in the Orkneys. Here we be: 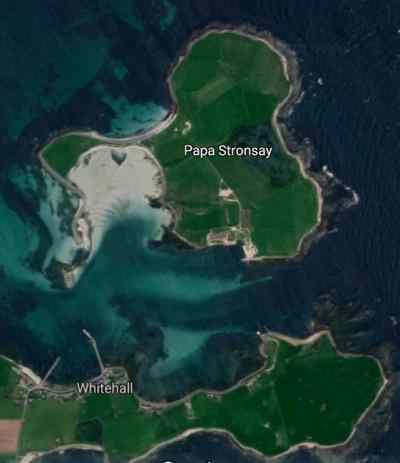 The peninsula to the south is part of Stronsay and Whitehall in the all that remains of the Orkney herring industry. Back in the day before WWI, 300 herring boats operated out of Whitehall and 1500 fishwives were employed landside gutting the catch and salting it away in barrels for export to the Baltic probably through Hanseatic ports like Lübeck in exchange for salt. It must have been like the Main Tickle in Newfoundland where, they say, you could walk across the harbour one boats at a time. For scale the distance from the Whitehall pierhead to the Point of Graand on Papa Stronsay.

There are a number of places named Papa - Papa Stronsay, Papa Westray, Pabbay [where we were August 2017] and they are all named in tribute to the sea-faring away-from-it-all Irish monks who took the gospel and themselves all over Europe but seemed to prefer brutal isolated [isola = island, after all] outposts nearer to god but far from the madding crowd.  All that cockle-shell travelling goes back more than 1,000 years before the Northmen, with bigger boats and a more acquisitive demeanor, more or less put a stop to exposed monasteries. 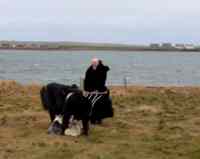 Papa Stronsay, all 74 hectares of it, was bought from its farmer by a group of catholic schismatics in 1999.  These boys called themselves The Sons of the Most Holy Redeemer aka The Sons, and are affiliated with the Society of St. Pius X aka SSPX. That was founded by Bp Marcel Lefebvre in 1970 because he and others wanted the catholic church to carry on on its same old same old ways and ignore the agreements of Vatican II. They really didn't approve of all that Vat.II accessible stuff - mass in a language familiar to the congregation, the priest celebrating it facing the people rather than the altar.  I believe [hallelujah] that most of SSPX including The Sons were accepted back into the Church of Rome by Pope Benedict.

Despite the remoteness of their Golgotha Monastery on Papa Stronsay, The Sons seem to be part of the global village: a) being down with youtube when they find a seal Phoca vitulina in their cloister and drag it back to the sea on a sheep-hurdle [R]. They also blog away with the best of them, propagating their way of life to the world. I don't know what the original Irish monks would have thought of current developments.