Because I was a perfectly ghastly person in a previous life, The Fates have made me convenor of the Wexford Science Café, which meets of the 3rd Tuesday of most months in The Sky and the Ground on South Main Street, Wexford [all welcome!]. It's been running for 4 years now and has featured many times on The Blob, because, well, Science Matters. "Running" would not be be the best verb to describe WSC's progress because convening a schedule of speakers is more like pushing a bus uphill. But enough of this passive-aggressive moaning, we've just had a Third Tuesday and nearly a dozen people turned up and everyone contributed to the discussion. So that's clearly a success. 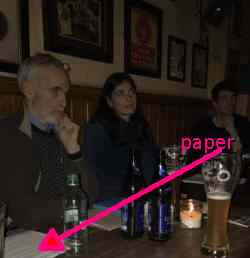 We had on the table a May 2018 paper [see R under the watchful elbow of His Blobbiness] about the relationships among: periodic fasting, fatty acid oxidation, intestinal health and longevity. Here's the Executive Summary from the MIT Press Office. Of course as an impoverished independent scientist, you may be sure I wasn't going to shell out $31.50 to Elsevier to read the whole paper; but SciHub delivered. The discussion made us briefly Famous on Twitter. It is prolly a coincidence that Luke O'Neill was talking about aging on Newstalk FM the very next day. Calico, the company being admired by O'Neill, has a string of prestige papers on senescence. We've met their CSO, David Botstein before. The model organism for longevity is the naked mole rat Spalax ehrenbergi. They're right small but they live for more than 30 years. It may be to do with caloric restriction. Seemingly Spalax finds itself without food periodically and the hypothesis is that drives its long life.

Me, I'm a fan of the Harry "BIG" Secombe diet "You can each as much of whatever you like . . . so long as you don't swallow." I spent more than half my adult life toting around about 10kg of extra lard under my jumper. When I started working at The Institute six years ago, all I ate between breakfast [two small slices of toast] and supper was a modest cheese-and-nothing sandwich made on home-made sourdough bread. There's a canteen at work: cooked breakfast; cappuccinos; packed sambos; muffins, cookies; massive plates of meat-and-two-veg; dessert; candy-bars are all available. But I'm too mean, and frankly, too busy at work to go for any of those things - unless it's a free dinner with a visiting speaker. That didn't make much difference to my [over-]weight because when I got home, I'd have m'dinner and then graze through the bread-basket and cookie-jar. For the last couple of years, I do this far less often, indeed I metaphorically or actually brush my teeth immediately after supper most days. Consequence is that I'm down to a little less than my 18-to-30 weight. It's a real bind after Xmas - not only is that far too much cookies and calories in circulation BUT I see half price stollen in Aldi and 6 mince-pies for 45c. That makes them cheaper than potatoes, so it's hard to say No.

We spent some time at WexSciCaf talking about the 5/2 diet because that accords with the caloric restriction hypothesis. Deal is that you can eat around you for 5 days so long as you go cold turkey eat nothing for the next 2 days. That would be far too much for most Westerners so the advocates of 5/2 allow you 500Kcal a day on the off days. That's possible surely:


Another potentially beneficial regime is to have breakfast . . . in the old style where we used to not eat for 12 hours before the first meal of the day. The absence of food for that amount of time each and every night might trigger a spike of fatty acid oxidation which will turn over the stem cells, renew the cells lining the gut and make us live longer.

These diets have another thing going for them: they must be hard to monetize. Megacorp will surely find it difficult to make a product out of eating nothing. A few years ago my in-laws inherited an indoor cat from one of their descendants. This creature was fat, and it got fatter under the care of two indulgent pensioners. When it sat waiting for food, it looked like a heap of extruded ice-cream. They took it to the vet for a check-over and that charlatan sold them a €20 = 4kg bag of Cat's Slimming Pellets! Vastly more expensive than regular cat food, it seemed to work by being repellent to eat. I offered to buy them a 25kg bag of sheep muesli at €8.95 but my PhD was trumped by the Vet's B.Vet.Med.
Posted by BobTheScientist at 07:38