You know of course that the black box [R] with which we all familiar isn't black. If there's a disaster involving tonnes of aviation spirit and lots of flammable material then the default background is going to be charcoal. Here, I've created a portmanteau phrase to indicate a box to be ticked for ethnic diversity.  Damn but I hate tokenism! Suits, who haven't a clue don't really care about ethnic diversity or inclusivity, know that they must do something about the optics: so they appoint an Equality Officer to review all the official documents from their institution.
Problem: Too many white faces?
Solution: retake some of the photos to include just enough people of colour [✓], wheel-chairs [✓], BLTs [✓], women  [✓] to meet a more or less arbitrary threshold for right-on'ness.

I won't suggest that minorities are seen as a threat but they certainly aren't considered an opportunity. I'm thinking of appointing myself MLO - Minority Liaison Officer. You might think that is an outrageous bit of cultural appropriation - I am, after all, The Patriarchy personified: white, straight, grey, male, propertied, [over]-educated. Then again, then again . . . to have a silver-back laying about him insisting on fairness, equality, affirmative action . . . and giving up half his salary pour encourager les autres; that might make people take notice. It is a fact of Western life that folk listen to people like me as they don't listen to those slightly mythical "black lesbian single-parents". In October, for example, I was one of only 5 out of 800 employees who saw a workshop on Gender Pronouns as an opportunity . . . rather than a threat an irrelevance that could eat into my lunch-break.

I'm getting these ideas above my station because I was invited to view a propaganda video from an Institute of Technology which presumably is an attempt to recruit more, and better quality, students to sign up on the CAO forms: bringing fees and bums on seats to the IT. Have you gorra couple of minutes? Chekkit out and ask yourself - if I was 18 [or 38] and got the points, would I spend four years of my life there?

Here's my feedback: Nice. Earnest. Monochrome: O'Reilly, Nolan, McNamara, Dunford (blokes featured first, women in second place tsk). Devereux (Up Wexford!), Mynhardt (best tan), Scott, Kavanagh. In fact, disregarding the 4M + 4F stars, not a single person of colour features even in the background. Next edition please to feature some New Irish: Abdelhakim, Gregan, Щу́кин, Tadema, Wang. On the way to get a cup of tea a few days ago, I bumped into the VP Student Affairs [or os she the Colonel of Corporate Strategy? - a Suit anyway] and said I knew just the bloke for their next video. I've known him for 2.5 years; over the telephone you'd know him as 'good school' Midlands, without the voice you'd say Africa; he's funny, self-deprecating, symmetrical, ambitious, helpful. He's the only Irish who has tried some French on our Erasmus students from Montpellier.  Put him and his Polish-Irish pal in the next propaganda video together with the two Dub Dubliners they hang out with. They're a stitch! They'd go viral and we'd be batting away a wave of New Irish applicants for the next three years. 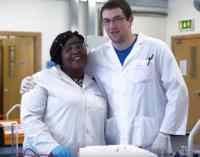 The Competition. Are you more taken by
Next life, I'm off to IT Heidelberg or Coimbra U, it has got to be more fun there.
Posted by BobTheScientist at 07:09