Since as long as I can remember I have been a tree-hugger. Not literally, mind, because the noblest trees are usually too big in the girth to get your arms around. Since we bought the farm 20+ years ago, I have planted thousands of trees both on our home place and as part of a meitheal for friends and neighbours. On balance, I think that offsets the carbon footprint of sending so much wood-smoke up the chimney each winter. But trees require more than hugs and having trees on your property comes with responsibilities. Every storm that crashes in from the Atlantic, trees or parts of trees come crashing to earth and have to be cleared up. I can do the tidy up and enjoy the work because the result of the honest toil is a pile of fire-wood to boil the tea-kettle in a couple of years time. But some trees are too close for comfort and then it is dicey to wait to see when and which way they fall. We were lucky with the Darwinday Storm of 2014 because the wind blew the 4 enormous Mackie Cupressus macrocarpa trees away from the house and not on top of it. 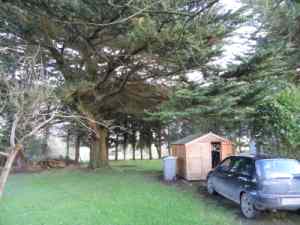 Two years later, in February 2016, the one surviving Mackie [R looming massive previous to treatment], now exposed to the full brunt of the SouthWest gales started to shed its upper branches and so I asked my tree-surgeoning pal Rissoles to tog up and bring them safely to ground rather than waiting for them to fall on the fragile garden shed immediately below. I did the ground works as and when timmmmmber came down from above. While he was up there he did a bit of prophylaxis: evening up the weight upstairs and tidying the ragged ends of previous falls. When he'd finished the tree was safe and looked neat. I was happy and relieved.

A very few months later, the owner / rentier of the house next door announced that he was going to sell his house as part of his retirement package . . . and would we now agree to fell out another large ratty looking Mackie that stood on the property boundary overhanging both his garden and the county road. It looked ratty because about 20 years before a family friend had gone up the tree with a chainsaw wearing jeans and a pair of runners and cut away random pieces of top hamper to reduce the windage. Feeling pressured by a fellow who hadn't been bothered to say hello previously, I didn't feel super-happy about this ultimatum proposal; but agreed to it. At least the neighbour, who stood most to benefit, offered to go halves on the cost and announced that he knew just the man, a contractor from the banks of the Suir, to do the work. I've met a good few tree surgeons and lumberjacks over the years and they are mostly efficient, highly-skilled, mild-mannered people with a hearty appetite. The contractor turned up a week later with 3 workers, a truck, a van and a chipper/mulcher. His people worked like the divil and reduced the whole tree to its component parts well within the working day. But it was ugly to see the teenage apprentice hazed and harried, and the Polish groundsman disrespected while their gaffer leaned on his shovel or made phone calls all day.  At one point he drove his 4x4 directly at me and young Bolivar because it was too much trouble to ask us to step out of the way and it mildly amusing to see the shock and fear on my face as we dived left and right.

When the tree was down and everything was almost all tidied away he gestured at the pruned and tidied Mackie on which Rissoles had worked that Spring and asked <sneer> "Who did that?". The clear implication was a) that I was a fool to pay for the work and b) that sort sort of thing was a waste of time. The next statement was quite explicit "The only thing to do with them big Mackies is to fell 'em for firewood". The idea of respecting the right to exist of a tree that had been 60 or 80 years a-growing was, to him, laughable. The thought that a tree, in and of itself, was a thing of beauty in the landscape or utility in the ecosystem was impossible for him to imagine. Big trees were just something in the way, which had potential to be converted into money. I've told this story to a number of people in the tree and timber trade and they've all had a flash of recognition. I don't have to name the crusher of the treescape because he is an archetype - so common as to be almost the norm - whose chainsaw is a vital part of his sense of machismo. Is it a wonder that they behave like dicks? . . . and they make money by paying the workers as little as possible.


Posted by BobTheScientist at 07:45