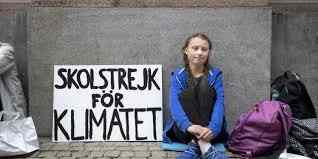 "Nobody made a greater mistake than he who
did nothing because he could do only a little"
[prev quote] Edmund Burke
Skolstrejkar för klimatet - it's a thing . . . in Sweden because one 15 y.o. kid [Greta Thunberg above] decided that a) nobody she knew, nobody she heard on the radio or TV, seemed to be doing anything very much about Climate Change b) she'd have to do a little. Poor child couldn't live with herself, didn't see much point in living, with this cloud, this gathering storm, hanging over everything she knew and loved.

When I was 6 or 7, there was a conjunction of several planets. This event was trailed on BBC news with some footage of folks from India preparing for the consequent end of the world. Much wailing and gnashing of teeth, sack-cloth and ashes in the sub-continent. I spent the whole following day sick with apprehension, silently looking about me saying goodbye and wondering if the end would be painful. By tea-time I'd come to terms with oblivion but as dusk fell and we were all still walking around, I reckoned that the sun would probably rise in the morning and the BBC had been misinformed.

Half a century later in Sweden, Greta Thunberg worry's was not similarly and quickly relieved because her armageddon with not time-limited - although no less distressing for that. She was so shoulder-slumped with apprehension that she stopped eating and speaking - because, what's the point? Very distressing for her parents who stopped working to face and corral the agony within their family. Part of the problem was that Greta is labelled Asperger's; as she says, for her things are black-and-white and she is physically unable to lie. The fact that she has no time for social play is not the most important aspect of her syndrome. Eventually, Greta came to align with Ed Burke: it wouldn't help Greta or her parents or The Planet if she starved to death. What to do? Stop going to school for starters: the whole school-system seemed predicated on inertia, status and status quo. It seemed more useful to make a big placard and start a sit-down strike outside the Swedish Parliament. She did this alone for one day in September 2018 and then in like-minded company for several weeks. Right now her protest has rowed back to Fridays. Greta and her pals were consciously emulating the response to yet another school shooting a year ago in Florida - macabrely named the Valentine's Day Massacre. There, in the National School Walkout, students refused to go to school because the adults in the room were spineless about doing something about the American way of death. It probably seemed safer at home. 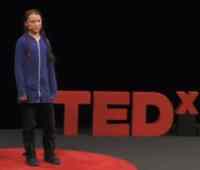 Eventually some people in Sweden paid attention to Greta's sense of urgency and she was invited to speak in mid-December at the 24th UN Meeting on Climate Change at Katowice in Poland. She gave it to them and the wider world insofar as anyone tuned into the reportage. One of her stop-the-world-I-want-to-get-off statements is that people in Sweden have enough - surely to goodness we have enough stuff. It might be a start if people like her (and me, and probably you) stopped now buying new clothes, phones, lactose-free milk and allowed the Third World to catch up. It would be far too much for us white-folks to tithe our disposable income for the less fortunate - heck we need that Summer holiday after the hard working year.

Her story was picked up by Amy Goodman at Democracy Now. If you could not make it to Katowice, you could have caught her a few days earlier at TEDx Stockholm. Greta and her dad Svante have to be circumspect about their bookings because part of Greta's climate-healthy living regime is that she won't fly: it took two days to drive (electric car!) from Stockholm to Katowice. She's given up meat too and encouraged her folks to follow her in this - all those cow burps, all that methane; she really didn't want to be any part of that. Her mother can sing even if she does occasionally eat meat.
Nobody made a greater mistake than he who did nothing because teenage girls count for little in our society. Greta Thunberg is speaking the truth to power, the least we can do is adopt just one of the many life-style changes she has embraced.

Related exhortation:
You cannot begin to preserve any species of animal unless you preserve the habitat in which it dwells. Disturb or destroy that habitat and you will exterminate the species as surely as if you had shot it. So conservation means that you have to preserve forest and grassland, river and lake, even the sea itself. This is not only vital for the preservation of animal life generally, but for the future existence of man himself -- a point that seems to escape many people. -Gerald Durrell.
Posted by BobTheScientist at 07:34