It's more than 20 years since we founded HEN the Home Education Network. Once a month during 1998 we packed the girls [Dau.I turned 5 and Dau.II 3 that year] into the car and drove 100km north to a scout hut in Greystones to meet with the other HENnies. It was an exercise in tolerance; listening to other tree-huggin', rice-cake-eatin', sandal-wearin' alternative folks lay out their daft and impractical ideas while ignoring our eminently sensible counter-suggestions. After much debate it was agreed that there would be no chair or secretary at any meeting - a facilitator and a scribe were to be designated instead. It seemed that we'd never get to confronting the Government's plans to curtail our freedoms because we spent hours and days dealing with the minutiae of our own intra-group dynamics. One of our number agreed to edit a newsletter and returned following month with the 1st Edition printed in colour and stapled in the corner. Some of the front covers were paler than others and I suggested that it might be better if the editor took a crisp camera-ready copy down to her local printer and get it photo-offset printed licketty-spit and back-to-back thereby saving trees. Editor "No, I wouldn't do that, I like watching each page emerging from my printer". . . the other professional Dad and I studiously avoided catching each other's eye lest our brows simultaneously crinkled in exasperation. 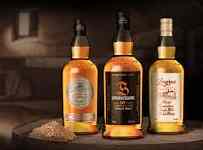 I was reminded of this watching-paint-dry approach to process while watching a tour of Springbank Bank Distillery [see L for fruits of production] in Campbelltown, Argyll. It is a most peculiar mix of automation and handicraft. The machine which applies the labels to the whiskey bottles is served by a bloke [minute 11.30] who lovingly holds each bottle into the press. No wonder fancy whiskey is so expensive. But really how far down the tracks of automation do we want to go? Each time a machine replaces five workers, there are 5 fewer customers who can afford to buy the product.

One of the things that my PhD mentor and I had in common was that as teenagers we had worked in [different] mills. He was assigned to work with an ancient almost-bent-double man in a room on one of the middle floors. They sat around smoking until every so often several tonnes of grain would pour from a chute in the ceiling. Their task was to push and shovel the heap through a hole in the floor on the opposite side of the room - just like the way malt is treated at Springbank distillery. Too much like bonkers to the young feller. After the second mighty heap had been disposed of, he went out round the mill-yard gathering lumber, borrowed a hammer and nails and jimmied up a chute from the hole in the ceiling to the hole in the floor. The ould chap and the youngster had a day and half sitting on crates, smoking and watching the fruits of labour whistling past. The line manager eventually found them getting paid for doing bugger-all and told them to clear away all the new works and get back to work like it had always been done. Some managers show a certain want of imagination.
Posted by BobTheScientist at 07:33