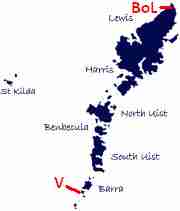 Life's a beach, and then you die. Too many of us treat the process as a race: to get furthest with the mostest. But we all finish up six feet down in a six-foot box - unless we choose to quick-release our carbon foot-print with cremation.We may as well try to pay attention to the landscape along The Way rather than hurtling heedless towards this dank and wormy finish. I consciously gave up the bike and started walking to work in 1985 in an attempt to be more mindful of the process rather than treating as dead time. In 1989 I walked 700km alone along the coast of Portugal; 15 years later I continued the journey from Tui on the Portuguese-Galician border to France. Those 900km were less lonely, indeed it was a bit of a mill going upstream along the Camino de Santiago.  I was talking large last Winter [12 years later] about Part III of the Process of Pilgrimage and my researches turned up the Hebridean Way which runs 250km from Vatersay [V on Map R] in the South to the Butt of Lewis [BoL on map].  It requires only 2 ferry trips - Barry to Eriskay and North Uist to Harris - because several of the islands have been joined together by permanent dry-shod causeways. The cycle-way is 18% longer and has been completed in 12 hours, but I bet Mark "The Whizz" Beaumont didn't hear a corncrake Crex crex or stop to see larks Alauda arvensis ascending. But, lookit, if you consider that map of the Outer Hebrides carefully you'll notice a spray of blue dots further South than Vatersay, which is the most Southerly inhabited island in the archipelago and is conveniently connected to Barra. Therefore infrastructual deficits [lack of beds, boozers, ice-creams, and plasters for blisters] exclude the other small blue dots from the Hebridean Way. But that's not a sufficient excuse to leave them off the ever lengthening island inventory on The Blob. So let's hear it for Pabbay, Mingulay and Berneray.  All those *ays: from the Old Norse for Island so Eriskay Island is a solecism.

It is annoying for everyone that there are two Bernerays in the Outer Hebrides. Damn silly and confusing. There are, indeed, two townlands [the smallest civil division in Ireland] in County Carlow; we live in the real one and lose post to the other one occasionally.  U.S. Board on Geographic Names is briefed to have unambiguous place-names, but their writ runs not to Scotland or Ireland. Nevertheless the two Bernerays [Orig. Bjorn's Island] are differentiated in Scots Gaelic: Beàrnaraigh na Hearadh (Berneray of Harris) in the north and Beàrnaraigh Cheann Bharraigh (Berneray of the Head of Barra) at  the very South. Perhaps because nobody lives there anymore Beàrnaraigh Cheann Bharraigh is now widely, if loosely, called Barra Head which is a synecdoche [bloboprevs].

Turns out that there are two Pabbays [Old Norse Papey island of the fathers/monks] as well: effectively paired off location-wise with the Bernerays one pair looking across the Sound at Harris and the other associated with Barra. Pabbay of Harris was cleared of its human inhabitants in 1846 to make way for sheep. That was a tragedy but not unexpected as the Highland Clearances spread across Scotland in the 19thC. The depopulation of Pabbay of Barra occurred with more shocking abruptness when all the adult males were drowned in a storm in May 1897 and their relicts packed up within a few years to find an easier life elsewhere. The crags and cliffs of Pabbay attract climbers: checkitout if you have a head for heights.

Next down the sea-lanes, Mingulay is apparently from Norse Mikilay Big Island: although technically it is smaller than Vatersay its cliffs make it rather more imposing. The human inhabitants hung on until 1912, when they decided that the hardship and isolation wasn't worth the candle. I guess they didn't want to hold their tenancies until a tragedy similar to Pabbay's overtook them. The 19thC was, for most inhabitants of the West European Archipelago WEA, the Age of Stuff. Candles, forks, cotton cloth, tea-pots, tea . . . if you worked hard enough you could aspire to such extras and in Birmingham or Roscommon it was easy enough to get things delivered. The level of literacy in the Highlands and Islands was probably higher than other bone-poor regions of the country and reading newspapers fueled a sense of "we'll hae some o' thae gibbles". Mingulay's access to the outside world was from the open strand. Getting yourself and your groceries ashore from a boat-tender was hard enough, but a piano posed huge problems. The Leaving started in 1906 when 3 families decamped to the flatter machair Vatersay as squatters, and over the next 6 years the rest of the people drifted away to better, or at least easier, places. Mingulay was acquired by the National Trust of Scotland in 2000. You can get Derek Cooper's nostalgic Hebridean Road-to-Mingulay Trip for £0.01 on Amazon, I'll probably bite too! 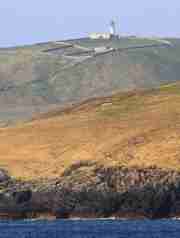 Berneray of Barra shut up shop in 1910 after being continuously inhabited - the folk made a living from fishing, fowling [guga / gannet same thing blooargh!] and a few rows of spuds or oats - for at least 2,000 years.  There were hardy people living there to tend the lighthouse [L looking romantic] up until the 1980s, when the lighthouse was automated.  It looks a bit of a peculiar location until you twig that this view is looking South and that the lighthouse is hanging over a mighty cliff to illuminate the hazard of the Hebrides to shipping travelling North. You have to also appreciate that the lighthouse isn't there for when the weather is fair enough to see it clearly. It's there for when Atlantic storms roll in with 3000km of fetch to build up some ship-crushing waves. 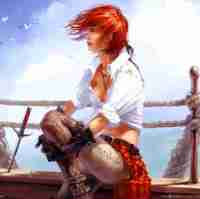 All this depopulation spells a contraction of the appendages towards a more centralised, convenient, homogeneous way of life. But diversity is our hedge against an uncertain future. As alternative lifestyles are deemed to be impossible /unsafe / too costly to maintain, we lose the perspective to look from the outside and evaluate critically the assumptions we've made in embracing the currently dominant political and economic certainties. otoh, we don't want to embrace every red-blooded boy's romantic fantasy about the islands [R] and the red-headed Hebridean girls who live there. Contraction from the wild places is a bad move if the underlying assumptions are faulty because "if a wolf did come out of the forest then what would you do?" Cue Peter and the Wolf. Which brings me to the music of this part of the Hebrides.