UNESCO has announced that 2019 is International Year of the Periodic Table; it being 150 years since Дмитрий Иванович Менделеев Dmitri Mendeleev nailed down the properties of enough of the known elements to form a table with some predictive power. If you know the atomic number of an element you can have a reasonable punt about its chemical properties. That's because the atomic number is effectively a count of the [positively charged] protons in the nucleus and these are matched by an equal number of [negatively charged] electrons whizzing round the outside of nucleus making chemistry happen. For periodic table geeks here's a spiral representation of the same data from Pop Mechanics.

The characteristic hydrides of the elements in the top right corner have one less H as you go left because they have one more electron in their outer shell: Methane CH4, Ammonia NH3, Water OH2, Hydrofluoric acid HF. About a dozen of the elements were known in pure form to the ancients: C carbon S sulphur Fe iron Cu copper Zn zinc As arsenic Ag silver Sn tin Sb antimony Au gold Hg mercury Pb lead. Nothing new under the sun for hundreds of years until, in 1669, Hennig Brand proved the existence of P phosphorus. Science had to wait another 66 years for Co cobalt and Pt platinum. By the time I was in school in the 1960s, there were 103 elements on the periodic table hanging up on the wall of the chemistry lab. All those with numbers higher than U 92 uranium were madey-uppy radioactive creations which were made, at vast expense, in minute quantities, and decayed into something else before anyone could find out much about them. You can see these transuranium elements in the long up-tail on the right side of this chart one every few years since WWII: 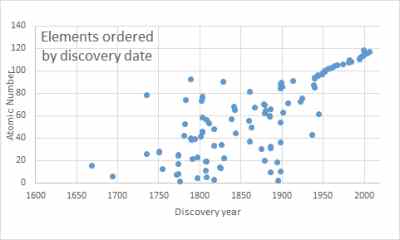 Before that recent spike, there doesn't seem to be a pattern in when elements were discovered. Abundance must be a factor; but also reactivity plays a part. The inert "Noble" gases, for example, were unknown until the very end of the 19thC.

The last naturally occurring element had to wait until 1939 to be definitively identified. Francium, element 87, is found in nature but francium223, the most stable isotope, has a half-life of only 22 minutes; so you have to be quick to catch it. It was discovered by Marguerite Perey, a protegé of the great Marie Curie who named Polonium after her natal country - although she did all her scientific work in France. Perey got naming rights after her discovery and took her hat off for La Belle France. Francium is found in ores rich in Uranium as part of a natural decay chain [L - there is one error in the numbers shown - check the actinium Ac], because it is so fizzy and unstable, they estimate that at any one time there is only about 30g present on Earth at any one time. But if you try to grasp it, let alone analyse it, the damned stuff slips through your fingers to become astatine At. The vertical downward lines connecting the various elements in the diagram [L] are the result of alpha decay - where the nucleus shed 2 protons and two neutrons, so the atomic number goes down by 2 and the atomic weight decreases by 4 units. The up&right diagonal lines are the result of β decay which, by losing a massless negative charge, makes a new element with the same mass.

The virtue of the periodic table is that you can predict the qualities / properties of elements before they've actually been discovered. The chemists were on to element 87 as early as the 1870s, giving it the provisional name of eka-caesium and jamming it right under caesium in the column of alkali metals: lithium Li - sodium Na - potassium P - rubidium Rb - caesium Cs. It's 'discovery' by a succession of people from 1925 onwards, was quickly rubbished by other workers in the field:
But the crown ultimately settled on Perey's head because her data was internally consistent and like  nothing that was known. Whereas the other contenders' ideas could be countered with a simpler explanation. Like her mentor Marie Curie, Marguerite Perey died of cancer: almost certainly driven into her bones by working in a perpetual stream of radioactive decay products.

More Women in Science
Posted by BobTheScientist at 07:49