It's a while since I did a pitch on the Island Index. 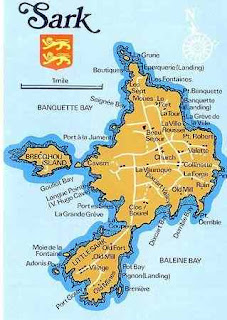 Sercquiais is the variety of Norman French that the oldest inhabitants of Sark speak. Sark is one of the Channel Islands, and the whole parcel of them are a peculiar political anachronism. They are (separate) personal fiefs of the British monarch, so not part of the EU nor indeed of the UK, but are part of the Customs Union. Sark is part of the Bailiwick of Guernsey. As part of the peculiar feudal political system, Sark is held in fief by the Seigneur of Sark who in turn has 40 feudal vassals known as tenants. This is not the same as tenant as 'one who rents a flat in Dublin' but rather (going back to its original French meaning) a 'holder' of a tenement. Everyone seems to inherit their entitlements and every one of the 40 tenants was entitled to a seat in the Chief Pleas - [Sercquiais: Cheurs Pliaids] the local parliament. The Seigneur and the Seneschal of Sark also ex officio took a seat in the Chief Pleas as well as 12 members elected by the other ~450ish inhabitants of the island. The Seneschal - effectively the local Justice - is appointed for life by the Seigneur. The Serkyee are thus fantastically over-represented. Worse even than Ireland which has 1 TD for every 30,000 population compared to 1 MP per 100,000 across the water in UK.

I put all that representative 'democracy' in the past tense because, in 1993, part of one of the forty tenements - the island of Bercqhou [see map R] off the West coast of the main island - was bought by the Billionaire Barclay Brothers. These lads, twins born in 1934, are the poster boys for venture capitalism; making a habit of buying cheap and selling dear such names as Ladybird Books, The Telegraph, Woolworths, Littlewoods, The Ritz Hotel and . . . Bercqhou. In the 00s, they carried out a sort of putsch; forcing the Chief Pleas to reform itself into a 30 member chamber with 28 of the seats filled by direct election; thus ending the House-of-Lords-like unelected representation prior to 2008. They all had an interesting war during the German occupation of the Channel Islands, but Sark fared better under that imposing regime than the other Islands.

That's all very quaint and medieval. Perhaps more interesting scientifically is to reflect on the fact that Sark is a skim of topsoil on a pimple of metamorphic and igneous rock sticking up out of a tumultuous sea. It is therefore geologically diverse and diversity suggests money to those who put their shirt on digging holes in the ground and coming up rich.  How diverse? Was answered by Ixer and Stanley in 1983:
"The primary ore assemblage is pyrite, galena, chalcopyrite, tennantite, tetrahedrite, sphalerite, marcasite, arsenopyrite, pyrrhotine, bravoite, enargite, and the silver minerals pyrargyrite, pearceite, polybasite, and acanthite. Gangue [ie useless] minerals are hematitic quartz, calcite, and illite. Alteration products include chalcosine, covelline, blaubleibender, covelline, limonite, malachite, azurite, cerussite, and anglesite."

Unless you're a prospecting geologist, that will be mostly a list of foreign-looking words. Galena is PbS = lead sulphide while pyrite aka fool's gold is FeS2 or Iron II disulphide. I've high-lighted the Irish interest mineral pyrite. That's the stuff which was inappropriately and culpably used as packing under numerous housing estates during the last boom. Pyrite loses its structural integrity when wet so the houses above are sinking unevenly into the ground.  I've high-lighted the words that caught people's eye in the 1830s and 1840s.

In 1833, a British prospector called John Hunt persuaded the then Seigneur Peter Le Pelley to allow him to dig for the silver deposits. The bargain caused the bankruptcy of the Le Pelley family with Peter's nephew Pierre Carey Le Pelley ceding the mortgaged fief to Marie Collings. In all, the venture had cost £34,000 but had yielded only 25,000 oz of Silver which sounds a lot until you convert that to 700kg. Together with several 1000 kg of lead the return only amounted to £4.000 in folding money. The investment was distributed among 200 Cornish miners, and about 70 local laborers over the decade when hopes were high and speculators could be recruited. It is not impossible, the timing being good, to imagine that some of the laid off miners from Sark shipped off to find employment along the Copper Coast of Waterford in the 1840s and 1850s.