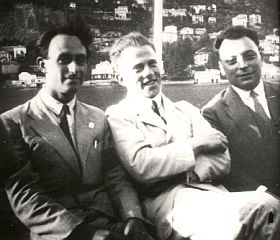 . . . was beyond his ability to answer . . . so long as in was numerical; and interesting. He is remembered today for his power of estimation - quickly delivering a good enough answer. He tended to go off the boil when he had to do the dreary bump-and-grind to get a precise answer; leave that to 'computers' driving desk-calculators; and move on to the next Big Problem. I'm getting a handle on Enrico Fermi [L,L having just been introduced to Wolfgang Pauli L,R by Werner Heisenberg L,C] by listening to my latest borrowbox audiobook The Last Man Who Knew Everything: The Life and Times of Enrico Fermi, Father of the Nuclear Age [2017] by David N. Schwartz not to be confused with The Last Man Who Knew Everything: Thomas Young, the Anonymous Polymath Who Proved Newton Wrong, Explained How We See, Cured the Sick, and Deciphered the Rosetta Stone, Among Other Feats of Genius [2006] by Andrew Robinson. One could a) ask for shorter titles b) a little more imagination in the publishing world. Fermi has far less credibility than Thomas "Rosetta" Young as a Man Who Knew Everything because he really focused his considerable intellect on the physics of small things.

David Schwartz is the son of 1988 Nobel Physicist Melvin Schwartz, so he must have grown up immersed in the language, and presumably the relationship helped get him access to people and papers to compile his biography. Fermi must have been an asset, because he was welcomed to the United States direct from receiving the 1938 Nobel Prize for Physics in Stockholm. The family packed heavy leaving for Sweden because they had no intention of returning to Fascist Italy after Mussolini cranked up state anti-semitism. Fermi's wife would have passed for Jewish and her father later died in a concentration camp despite being an Admiral and wealthy. After Pearl Harbor, the Fermis became officially enemy aliens but by then Enrico was a key figure in the Manhattan project to develop nuclear weaponry before Nazi Germany: first at Columbia U in NYC, then at U. Chicago and finally off to Los Alamos.

Having read biographies of Richard Feynman, I was familiar with much of the narrative of Los Alamos but Schwartz's book has a good explanation of why the design of a plutonium bomb needed to engineer an implosion towards a core rather than firing two sub-critical masses at each other - which would work for a bomb using Uranium235 whose properties Fermi's team had nailed in the first sustained, controlled nuclear reaction in a repurposed squash-court back in Chicago on 2nd December 1942. Fermi had a roving brief in Los Alamos - a sort of EnricoTheScientist for lesser mortals to bounce ideas off. But he seems to have been quite ambivalent about the ethics of developing such a powerful weapon - especially after it became clear that the Germans were out of the war in the Spring of 1945. But there is rather a poor paper trail for Fermi and he died in 1954 = +60 years before Schwartz mobilised to write his book; so there is plenty of leeway for speculation about Fermi's motives and his actions.

One of his most famous actions was to drop pieces of paper as the blastwave propagated from the Trinity Test at Alamogordo on 16th July 1945. Those paper fragments travelled 2.5m from their launch point above Fermi's head; from which he was able to calculate the power of the explosion as ~10 kilotonnes of TNT. Much more expensive instrumentation delivered a figure of 18 kilotonnes the following day. It was a classic case of a good enough Fermi solution using an elegant appropriate technology experimental design.