I've been a bit of a fan of St Martin of Tours for his cloak sharing ways. And I've found all things Nederlands gezellig since I spent the Summer of '76 in Wageningen, watching the Tour de France, doing some ornithology, and learning the rudiments of the language. And here is the Venn diagram intersection between those two threads in my life's tapestry: 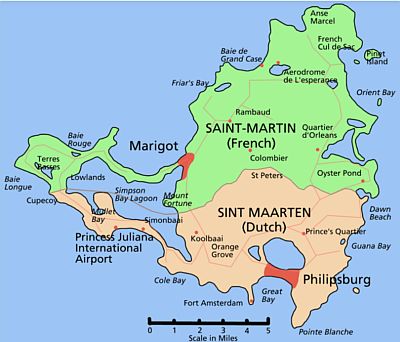 The island of San Martin was discovered by Cristóbal Colón a genocidal slaver and racist in the employ of Los Reyes Católicos Fernando II de Aragón & Isabel I de Castilla. Actually, the 11 November 1493 anchorage, which sheltered the ships of Columbus was probably Nevis but geolocation was sketchy enough in those days that the St Martin's Day island drifted north and attached itself to the Leeward Island of which we treat. And just so you know where everything is. The Leewards are (for NW to SE):

The French and the Nederlanders have been sharing the island as a condominium for nearly 400 years and the border took about half that time to settle into the current 60:40 split. Because both parts of the island are constituent parts of their European motherships, the grens/frontière has become an enigmatic pub-quiz question because for most of political space Belgium elbows between the two countries. Whereas in the Caribbean you can stroll across the border without your passport. If you want an actual condominium on the island, you'll need more than $1,000,000 . . . unless you want to be cheap. Cheap thrills? As far as youtube is concerned the only thing worth doing on the island is getting blasted by partly burned aviation kerosene where the airport fence meets the beach.

The two endemic species Calyptranthes boldinghgii a Fuchsia-like shrubbery & Galactia nummelaria, a legume are both probably extinct. The white sandy beaches depend upon seagrasses like Paddle Grass (Halophila decipiens), Manatee Grass (Syringodium filiforme) and especially, Turtle Grass (Thalassia testudinum) to stabilise the offshore seabed [prev elsewhere] in hurricane season and the mangroves are fighting a rearguard action against the demands of yachties for more anchorage.