Tommy Tiernan was for a long time a stand-up comedian but has more recently slipped into an RTE seat as a no-holds-barred interviewer.  This is weathering the pandemic reasonably well - fewer hugs and more edge maybe?  The 3rd episode in the current series features Brenda "My Left Oscar" Fricker, David "LGBTei Defensor" Norris and Bashir Otukoya, Assistant Professor in Advanced European Union Law at the School of Law and Government of Dublin City University. Chances are, if you have a drop of the ould Irish in your veins, that you didn't need me to ID Fricker or Norris. Likewise, you've prolly never 'eard of Bashir Otukoya. This is only partly because he's been on the planet for 50 years less than the other two guests but also because he black and we're not ready to cede the talking stick to New Irish like him.

Note: TT and Fricker talk frankly about depression [meds, hospitalization, Anthony Clare] while TT and Norris agree to differ about how delightful is the sight of human groins. So that's not particularly fluffy in the entertainment stakes.

Tiernan is imo basically a kind and empathic guy but he's got some history in provoking outrage after incorporating The Downs and The Holocaust into his patter. I don't think he's better than Patriarch me [or Patriarch you] in being down with The New Irish. "down with" here being an internalization of the crap which black folks have to wade through every day in Ireland. "At least they don't get shot by the cops on the regular" is a very low bar, lads. That time all my white students secured their work placement and none of the black kids did: it outraged me but I didn't feel it. 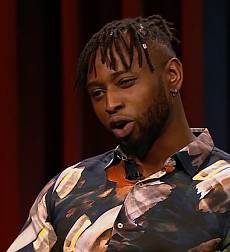 So TT asked almost-Dr Otukoya [R] where he comes from [A. Drogheda] which you have to be really careful doesn't come over as where do you really come from. Which is what Dau.I, who has the best hair and best tan in the family, gets all the time. Colleagues and customers justify / exemplify this intrusive curiosity by making circular motions with one hand around their face. As if to say, _I_ have this pasty white dial with freckles, what's your story.

And here's the answer to getting work-experience. "Bashir Otukoya" failed to get an interview for a job, so "Richie Bashir" re-submiited his application with an identical CV and was called back the next day. Don't it make you tear your hair?

TT: I know a school in Galway where the kids are so confident with their different ethnicity that they're able to play blacks vs whites soccer matches at lunch-time.
Dr O: Sure, we did / had that but [I paraphrase] WTF! It's not "wonderful" to be separated into groups as a child based on your skin colour. It doesn't affect the white kids but it ghettoizes the blacks. And it doesn't help with integration later on for employment, housing, get the attention of bar-staff.

I hope Tommy Tiernan learned something from that exchange . . . and by extension a million other, slightly complacent, RTE regulars. It's not quite 100 years since the Black & Tans were meting out similar treatment on the plain vanilla Irish. A lot done, lads, but lots still on the To Do list.