Scientists like to simplify their universe. When I go across the lane to view the sheep I don't need to have a roll-call: Flossie, Mimi, Mittens, OldMa, Batty, Freda, Bambi, EasyPC, Penny, Maude, Bonkers, Xsoni, Nisette, Gismo, Yana, Thethra. No, I can just clock off "64 legs" or "16 sheep" and return to the kitchen for a reviving cup of tea. I have acknowledged a commonality among some of the white objects in the field. I exclude other white things - tinkle-tissue, thistle-down, hanks-of-wool-on-a-bush - because they are NotSheep. Clearly Bob's Rule of Sheep is trivial; but mightier people than I have formulated 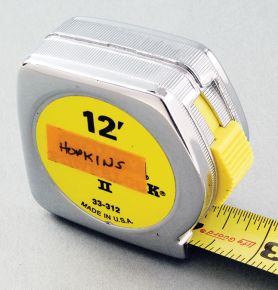 Observations in Physics and Chemistry tend to be more accurately reproducible: so Law; while Biology is inherently noisier, with more exceptions: so Rule. The post title is an hilarious riff on this, because I'm here to write about Hopkins' tape-measure!
To set the scene, let's think about Tenure. For scientists going all Ad Astra, apart from a Nobel Prize, the height of ambition might be Tenure at Harvard. Tenure is great in principle: it is a permanent contract so that the very best academics can pursue their researches even if these are edgy, rule-breaking, challenging, interesting or novel. Indeed, the powers-that-be should be hoping for something different or difficult from these academic elites. Obtaining this academic prize is a gruelling, multi-year "tenure-track" process of delivering academic jewels for peer-review . . . as well as schmoozing your colleagues / judges, mentoring younger people and developing inspiring teaching materials. And don't forget to volunteer for the boring admin tasks that someone has to do - timetables, Friday donuts, ethics committee.

There have been two scandalous stories this year about two senior, radical, black, female academics who have struggled through their tenure-track treacle only to be dissed at the final hurdle. Lorgia García Peña was denied tenure at Harvard and Nikole Hannah-Jones was refused entry to The Boy's Club in U. North Carolina. Both those links are to MetaFilter for not only the story but some hot take commentary from the liberal lefties who inhabit that section of the Blogosphere.  The real killer about failing your tenure application is that if you're not good enough for a permanent position at Elite U; then you're not wanted at any level and you are effectively sacked. Prof Hannah-Jones was, adding insult to injury, offered a five-year consolation contract at UNC. Sod off, she said, and took off for a proper job commensurate with her quals at [trad black] Howard U. in Washington DC.

This kind of nonsense is the antithesis of Old Tenure as originally conceived: it is a bunch of patriarchs pulling up the draw-bridge behind their sorry arses. I have known a number of cases where the hot-shot goes quickly off the boil shortly after obtaining their permanency: metamorphosing in to a curmudgeonly lump of deadwood occupying an office which would better be given over to someone younger, femaler, tanner and feistier. As Michael Caine quipped in Educating Rita, the only way to dislodge a professor who has tenure is if he "buggers the bursar". Which has become no joke as a succession of tenured professors have been #MeToo revealed as shagging or bullying their students in an outrageous leveraging of the power differential.

Mais revenons nous a notre Hopkins! You might think, therefore, that having obtained your tenure all would be fine and dandy. Nancy Hopkins was a hotshot developmental geneticist working in MIT in the last century. In her 40s, during a sabbatical with in Christiane Nüsslein-Volhard’s [who prev] lab, she had an epiphany! Zebra fish Danio rerio was the way forward for understanding the extraordinary process whereby a single fertilised egg becomes a moving, thinking, metabolising, complexly interacting member of its ecosystem. This change in academic direction required an extra 200 sq.ft of lab space . . . which seemed unaccountably unavailable for her, despite the tenure, and all. She had the impression that all the male PIs in her building had bigger labs than she did. But she took her tape-measure and a note book to generate the data to test her hypothesis.

In 1994, she drafted a position paper which she shared with the 15 [M = 202!] other tenured, female, faculty in the MIT School of Science [including Sally "Prochlorococcus" Chisholm - prev] and Lisa "immunity" Steiner prev]. They were a) impressed b) pissed and signed a letter to the MIT President setting out their stall and, by implication, demanding redress. Committees were set up, affirmative action was applied and 20 years later the ratio of tenured female faculty had doubled from 7% to . . . 15%. Full story. A lot done, a lot still to do!. This story gave me an inordinate hand-clapping sense of joy when I first heard it. You can sit on your hands and moan or you can stand up and start counting.