The World is a doughnut. 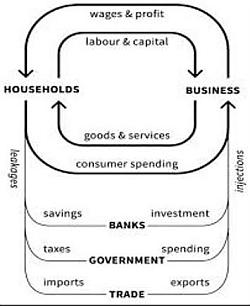 Thirty years ago economist Richard Dowthwaite published a book with a great title The Growth Illusion; so great that I went off and bought a copy. In 1991, we really hadn't a clue; we'd just got off the boat from England; and I had just started in a new field under a boss with exacting high standards. Having watched the 1984 Miner's Strike from the sidelines and not bought shares in British Telecom, I knew there was something wrong about the economic model which was being embraced in these WEA islands: the market is king; there is no such thing as society. I guess I hoped Douthwaite would put structure on my inchoate concerns about GDP growth vs a finite planet. Massive fail: I just couldn't get past about p.5 it was so dull and alienating. I must have given my copy of The Growth Illusion away because it is no longer glaring down at me reproachfully from the bookshelf.  The seed was ready but the soil was stony. 20thC economists thought economies were circular [R]:the main driver was the upper cycle: workers would get up in the morning  and clock-in for wages. At the weekend they'd buy stuff to sustain the factories and boutiques and cinemas which were employing them.

With a pinch of desperation, last week I downloaded Doughnut Economics: seven ways to think like a 21st century economist by Kate Raworth from Borrowbox. This is much better as an analysis of what's wrong with Capitalism and where we might go next . . . or maybe I've grown up enough to understand what it means. Raworth identifies two elephants on this economic merry-go-round a) The engine is missing: the energy [black gold] and natural resources from which goods are made are treated as infinite and available. b) Who makes the toast and washes the dishes - and the shirts, the car and the front stoop? The worker with his labour and his lunch-pail needs the invisible [unpaid anyway] support of his family. Yes yes pronoun alert: but still 73 years after the publication Paul Samuelson's Economics the worker is male and he's gorra wife,  We hear a lot about the squeezed middle: the productive backbone of society who are too rich to get a medical card but too poor to afford private health insurance. Raworth's economy is squeezed between the demands of people for a bright plastic basin to wash the dishes in [and the water to suds with] and the now suddenly finite resources of spaceship Gaia: 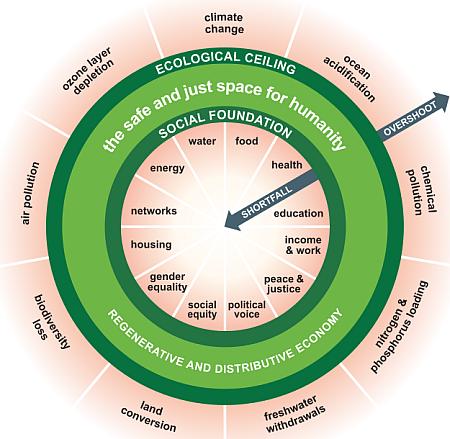 Raworth's economy is subtitled a safe and just space for humanity. The Market economy is quite happy to have emaciated kids rivetting eyelets onto Nike trainers because those kids are prepared to work for $2 a day. If it wasn't enough, they'd withhold their labour. Which works for academic economists: if they don't like Harvard they can move to Yale. For that kid in Indonesia, Nike may be the only gig in town . . . apart from prostitution or grubbing a living from a cassava garden.

There are four players in the Doughnut Economy: households [paid and unpaid]; the Market; the Commons; and Government. I've written about the Commons and how Garrett Hardin associated them - for all time- with tragedy. Some player would always try to put one more sheep on the common and the whole system would collapse dry up and blow away in a dust-storm. Not so fast, says Kate Raworth, for her the Commons are the glue of society all the things we do together without pausing to think if they are monetizable: busking, campaigning, Fortnite, peregrination, elder-care, after-school, adopting an unfluffy endangered species, starting a soup kitchen. We're on the planet for maybe 80 years, we'd better make the best of it. Reframing our existence from being a wage-slave to Capital to an equal contributing part of our community is a good place to start. contra Thatcher, the is such a thing as society: it's where I go drumming