When I was staying with friends in Boston in the early 80s, I felt the urge to make a layer cake. It must have been a birthday. A 3-decker chocolate fudge cake with orange butter icing featured in the available cook book and I duly plugged through the recipe. It was a towering success! and I added Joyce's Fudge 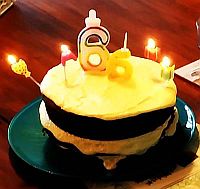 Cake to my repertoire. There came a time when I was fired up to make this party piece but could only locate 2 cake tins. Cranking down the ingredients to 2/3 of the original recipe should work, except for the question what is 2/3 of two eggs?  My notes indicate that I found two small eggs and used less butter; keeping the measurable quantities (flour, sugar, soured milk, cocoa) in 2/3 proportion. It was fine. But a fudge cake is supremely forgiving; it's meant to be a bit gooey and it's impossible to overcook. Overcooked fudge cake is called cookies. Heck; how big is "an egg" anyway? How long is a piece of string?

My pals at metafilter recently asked about a similar problem. The recipe requiring 3 large eggs but Cookie having only 2 large eggs and 4 medium eggs. My nerdnik answer was

The shoulder bars on |M4 - E2*1.5| indicate the difference between M4 and E2*1.5 regardless of which is bigger.In words, whichever of LLM or MMMM is closer to LLL is your best guess. Others noted that this was not the obsessive hill to die on. Carrot cake will be fine so long as there is some egg in there. But I like the idea of compensating a deficiency / abundance in one ingredient by tweaking another. In the ingredient space, margarine has more in common with eggs and milk than any of them do with flour.

My current book, recommended by Tim Harford channelled by Dau.II is Math Without Numbers by Milo Beckman. Beckman's boast is that the only numerals in this math book are the page numbers. His early chapters are about LWH dimensions and beyond that to n-dimensional hyperspace of which I acquired some intuitive understanding in my synonymous codon usage days. You can lose your readers quickly in such abstractions, so Beckman talks about the dimensions of bakery.

It cooking time and temperature are independent and quasi-complementary units of measurement. Meringues can either be made quickly at a high temperature or sloowwly in a "cool" oven. You don't get the same result but both varieties are supremmmnmmely edible. But there are the other dimensions alluded to above: flour, cocoa, eggs, butter, cream, milk, sprinkles. In this multi-dimensional bakerverse there is a region called cookies and others called cake and bread. Throw too many sultanas in the bread and you're stepping into cake territory and may need an egg for credibility.