In 1960 when I was ~6, I lived for a year in the “Captain’s House, HMS Verno, Potmouth” which tells you that my spelinge was as shockin’ poor as my hand-writing. HMS Vernon, Portsmouth is now a shopping centre but in 1960 it was part of the Royal Navy. It was a Shore Establishment where they trained sailors – both officers and men – in the fine art of mine-sweeping. My father, was the Top Dog at HMS Vernon. We’d occasionally be walking in his company through his domain. He had his peculiarities, my Dad, and he hated to see flags wrapped round flag-poles, especially if wet and sticky. They had to be either a) flapping brightly in the breeze or b) hanging limp beside the flag-staff if there was no wind. English weather is a mix of wind, rain, calm and occasional sunshine. If he saw a rain-wet flag clagged up against or around the pole he’d shout at the nearest fellow in a uniform to “Clear that flag”. The poor sailor had to work out what would please the cross-sounding 👿 who was on his case. Usually, this required hauling down the flag, resetting it at the mast-head, and hoping The Old man would go away; at least until the poor squaddie was somewhere else – preferably in the canteen, out of the rain, having a cup of tea and a biscuit. 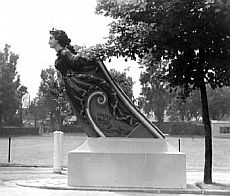 Right opposite the door to our house was a double-life-size figurehead salvaged from the bows of HMS Ariadne when that 19thC 26-gun frigate had finally been sent to the breaker’s yard in 1922. She looked a lot brighter in colour. The grassy area behind the figurehead is where I learned to ride a bicycle. It’s better to learn to ride on a road than on grass because staying upright depends upon inertia and going fast and it’s easier to get up to speed if the surface isn’t slippy and buckety.

Q. Why would you call a ship Ariadne?
A. Because Ariadne is famous in tale and story.

I used this as an introduction to a tall tale of Antient Crete which I wrote last month for Gdau.I: The Ariadne story needs an upgrade and she also needs a couple of sidekicks as supporting actors and choru♪. Somebody has to make the tea!

It turns out that HMS Ariadne is not just another work-a-day naval vessel after she was launched at Deptford in 1859. In June 1872, at Gibraltar, a sailor fell off the mast in a gale and the captain hove-to in order to affect a rescue. After a fruitless search, the cutter was recalled but broached to and was swamped. A second boat was launched to rescue the rescuers but one of the falls fouled when this craft hit the water and tipped the whole of that crew into the drink. The thing about launching boats from davits is that it requires excellent training and precise timing to release the boat at both ends simultaneously . . . even if there is a full gale blowing and a frightful sea running. All told 11 sailors perished that morning. Attention was drawn, in the letters pages of The Times, that nobody was wearing life-jackets. Also noted was there was a solution to the falls fouling in the form of a patent release-mechanism developed years before After a similar tragedy, the late Mr. C. Clifford, who had long bestowed the most earnest attention to the subject, perfected an exceedingly simple and efficient method of lowering a ship's boats in a few seconds, irrespective of the weight or size of the boat, or whether laden with its full crew or containing only one man. The lowering could be accomplished, too, and by a lad, just as easily whether the vessel were at anchor in a harbour or under a full press of sail or steam, and in a heavy sea. Regrettably, the Admiralty had not mandated this nifty piece of kit throughout the fleet.  Riding a bicycle is not the only thing involving inertia!