Christiane Volhard was born on 20 October 1942 >!today!< near Magdeburg in the Eastern part of Germany. They escaped to the West after the war and she grew up in Frankfurt. After a workaday PhD at Eberhard Karls Universität Tübingen working on gene expression in Escherichia coli, she decided to switch to the study of drosophila development. She was briefly married to a chap called Nüsslein and Nüsslein-Volhard became her distinctive scientific handle. She overlapped for a few months with a just finished PhD student in the same lab called Eric Wieschaus who helped her find her feet in her new field.  After pursuing their careers in different directions and different places for several years, they washed up together again at EMBL in Heidelberg in 1978.  It was one of the great, productive, hardest-working, scientific friendships of the late 20thC. 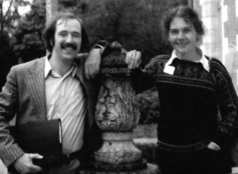 If you want to see a scientific collaboration that really delivered you can't do better that watch a delightful two-hander when she and Eric Wieschaus [R in the late 1980s] look back on the old days when they were young and at the very peak of their game.  Sydney "apoptosis" Brenner and Francis "DNA" Crick famously shared an office for twenty years and bounced ideas off the walls, some of which turned out to be really valuable insights into how the biological world worked. EW & CN-V shared an even smaller office and made it work for them and for science. You can't be crammed up against another person in this way without a mutual respect.  They both recognise that their unique talent is the capacity for observation; they were both really good at detecting uber-subtle differences from "normal" in a screening factory for mutants in developing fruit-fly Drosophila melanogaster larvae.  When they were in the tiny lab adjacent to their minute office a key piece of kit was a top-of-range optical microscope with two sets of eye-pieces.  They were scanning through hundreds of fly larvae bearing mutations, looking for those that changed the pattern and process of development. They'd know simultaneously that this slide was interesting and their friendly rivalry hinged on one being 2 or 3 seconds ahead of the other in claiming gold.  The interesting mutations were so rare that normal people would easily become slide-after-slide-after-slide inattentive - like being a quality controller on auto-pilot in a Saab factory.

She is famous in the legends of science for being so taken aback by one of the mutants that she cried out "Das ist ja toll!", [toll previously] presumably just before Eric twigged what they was looking at. Maybe he'd stepped out of the lab for a moment. This mutant was all belly and no back and so the complement to an earlier mutant that they had named dorsal.  It turns out that the proteins derived from these genes are part of the same biochemical signalling pathway: toll near the top - embedded in the cell wall detecting incoming signals - and dorsal near the end where it acts as a 'transcription factor' [homologous with mammalian NF-κB] switching on genes in the nucleus.

Christiane Nüsslein-Volhard, Eric Wieschaus and Ed Lewis scooped the 1995 Nobel Prize for their ground-breaking work in understanding embryonic development, one of the great miraculous mysteries of biology. How does a fertlised egg [N=1 cell] come to be an adult human [N=100 trillion cells] that is recognisably different from her dog which started off from essentially the same zygotic starting-blocks?

Toll was clearly important in the control of embryonic development: it sets up the dorso-ventral axis without which no growing, dividing cells will know where they are or where they are meant to be.  It was a staggering surprise when in 1996, Bruno Lemaitre and his boss Jules Hoffmann, working at CNRS in Strasbourg, discovered that flies mutant in Toll were abnormally prone to fungal attack [L adult fruit-fly riddled with fungal growth - the furry cardigan is a web of fungal mycelia]. The immunological importance of Toll and its pathway was emphasised when Janeway & Medzhidov and Bruce Buetler realised that mammals had homologs to Toll that were vital for correct immune function. We've met their favorite toll-like receptor TLR4 before sweeping TLR3 and TLR5 aside in its demands for attention. Hoffmann and Buetler shared the 2011 Nobel Prize, the others here named did not [ooops?!].

If the 1995 Nobel went to Nüsslein-Volhard and Wieschaus for discovering the first insect TLR Toll and the 2011 went to Buetler and Hoffmann for first nailing the immunological function of the mammalian TLR TLR4, do you think that the 2027 Nobel will come our way for discovering and characterising the first avian specific TLR TLR15?  No, I don't either unless and until the 20 billion [!!] imprisoned chickens break loose and take over the world. It might, however, go to those who are re-claiming a developmental function for TLR in mammals after TLRs-in-immunology took all the attention over the last 20 years: you know who you are.

We are so amazed when a woman makes it to the top in the boy's world of science that interviewers always ask her about being a woman in science rather than about being a scientist. As I paraphrased Dr Curmudgeon last year:  "Sir, a woman's sciencing is like a dog's walking on his hind legs. It is not done well; but you are surprised to find it done at all." CN-V talks [briefly] in a Nobel interview about the lack of respect that women who aspire to be scientists are likely to attract and expresses a dilemma about whether she is doing girls any favours by encouraging them to edge into the boy's club.  Nevertheless, in 2004 she set up the Christiane Nüsslein-Volhard Stiftung a foundation to help young women scientists juggle their careers with the exigencies of family life. So she clearly does believe in science for women and women for science and has coughed up a wodge of money to endorse this feeling. She is indeed echt toll; prima; fantastisch; klasse; wunderbar!