Whoring for The Man

My working life has been a career only in the sense of an uncontrolled car rushing down a boulder-strewn hillside.
In 2012 I was down to one day's work a week. I was cash-poor but time rich and me and Dau.II had a regular gig with her grandparents on The Pension Run: taking the elders in to the Post Office for the loot; helping with the groceries; making lunch; mowing the lawn; watching Pointless on the telly; a bit of beach-combing if the tide served; and then home to our own gaff. It was a win win win win arrangement.

Then at the beginning of December in that year, The Institute called to offer me a full-time job starting in the New Year. As you know Dear Reader, I accepted that job and The Blob was born. It is clear from my reading of the entries that it has been a whole lot of fun and I'm glad I took the plunge. But at the time I did the math on the returns for giving up 20 contact hours a week teaching, 20+ other hours preparing for teaching, marking, and attending meetings; several hours a week thinking about work; 7 hours a week driving to and from work in the Yaris. But I did seriously consider whether I would be better off sticking to the one-day job in Dublin where a) the rate of pay as 'Senior Scientist' was much higher than 'Assistant Lecturer' b) the proportion retained after tax and PRSI would be much higher. In purely financial terms it was close. I think, in the end, that I went to The Institute because I'd never done such high intensity teaching before: it was a challenge and tbh I felt I was under-performing in my previous job.

Here's a calculation by Leonard Skinner, who gave up the day job; shed all His Stuff and bought a boat to live on with his partner and two teenaged kids. 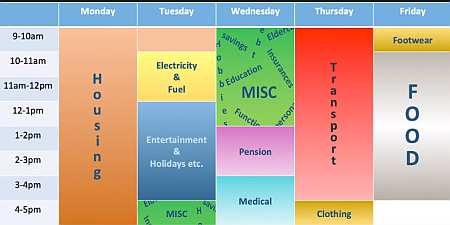 His point is that only about 20% of your average working week is going towards the real essentials of food and clothing; the rest is frittered away on stuff, places to hold stuff, heating and lighting for the Stuff Palace; holidays to acquire more stuff. And a crushing amount on the goddamn car to shuttle to work to be able to afford the Stuff Palace. You can read about Leonard's sailing adventures on The Faoin Spéir.

I sent this analysis to one of my ex-students over the weekend. He was the only bloke in my Human Physiology class for Pharmacy Technicians so that's fritzed the sex-ratio entirely . . . insofar as we have a binary sex-ratio anymore. I also sent him links to Ken Robinson on Passion and his book The Element. Dropping out of class partly because of an overwhelming sex-ratio reminded me of my tuthree years as a silver-backed samba drummer. There were very few [old] men in our samba school but loadsa attractive young women. One evening during the tea-break, the other old chap came over with a conspiratorial demeanour to say "It's a wonder more young men don't come here: look at all these fit young wans",