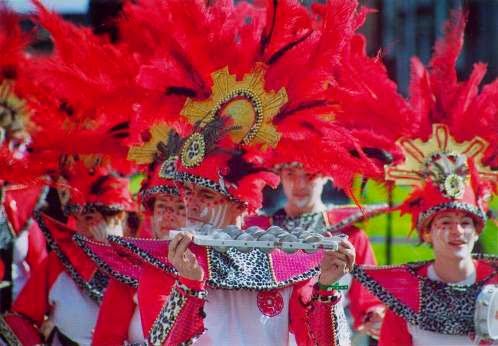 Lá Fhéile Pádraig
Six months ago, I gave a wholly inadequate summary of my days as a Sambista.  I thought it would give a better of view of my true self to blow up this picture of me as a bird of paradise shaking a chocalho more or less in time with a crew of other people in red and white.  I think the feathers rather suit me, no?  This photograph was taken 10 years ago today during the Dublin St Patrick's Day parade.  In 2004, we were still a community band with a youth wing from The Flats, and a commitment to running workshops in schools to improve youngsters' sense of rhythm and sense of self.  We made all the costumes ourselves by turning up every Saturday during January and February to fool about with scissors and craft-knives; cardboard and fencing-wire; feathers, fake-fur and sequins.  I learned that dress-makers won't let you use their scissors on paper - it blunts the tools of their trade. I made a lot of yoke-thingies that spring.

Within a year, the community facade crumbled from within as an internecine spat saw half of our effectives splinter off to form the People's Front of Samba.  In 2006, after our Glorious triumph in 2004, we were back in the Dublin StPs parade.  It was different: the Celtic Tiger was throwing money about like it was rice at a wedding, nobody had either time or interest in making our own costumes. The Dublin St. Patrick's Day Parade gave our group a a steamer-trunk full of money if we agreed to be anchor-tenants on the day.  So the gaffer went off to Brazil and commissioned a sweat-shop in one of the favela's of Recife to make 100 soccer-themed costumes.  It was probably cheaper that way than just buying the raw materials in Ireland.  But that's not the point!  I felt we'd sold out or been bought out. On the other hand, we had forged strong links with the Brazilian-Irish community and a bunch of them agreed to march with us: the boys kicking footballs about as only South Americans can and the girls stripping down to 3 sequins a piece to shake their booty.

In 2004, we travelled, in our ramshackle home-made costumes, from S to N in brilliant sunny weather. Two years later it was really cold. We assembled up North of Parnell Square, it wasn't raining but there was a whipping wind and Brazileiras promptly turned blue when they took off their coats for The Off.  My hands were so cold I thought I'd drop my stick - I had been promoted to one-stick-and-a-hand on a little side drum they call repinique.  But once we started moving everything warmed up and by the time we were rattling down North Frederick Street the percussion was pretty tight and the dancers were unbelievably loose.  I daresay there were some heart-attacks among the suits and soutanes on the official stands near the GPO. I don't know - I was too busy not fluffing the beat, not whacking my own fingers and not stepping on the heels of the woman in front.  Here I am in the middle supported by two pillars of our community:
It's not the same sitting on the sofa watching it on the television.
Posted by BobTheScientist at 06:32