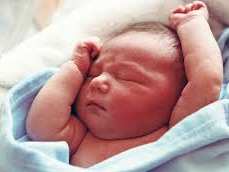 . . . those who wish to dice with a hospital-acquired infection. The rate of C-section in Ireland, at ~30%, at the high end among Western industrial nations. And it's not a First World solution / problem, Dominican Republic, Brazil, Egypt, Turkey, and Venezuela all have more that 50% of delivery by scalpel. The absolute numbers of caesarian births has doubled since 2000; the rate [12% in 2000 to 21% now] not quite so much because nobody is dying any more and the total population is up 1.5 billion people in that short time. What differ? Labour is so called because it is hard-work: certainly for Mum because she can remember it but it can't be easy for the emergent one, either. If modern tech can bypass the whole messy business and everyone survives, what possible harm?

Well a recent paper in Nature is not beating about the bush [so to speak] Stunted microbiota and opportunistic pathogen colonization in caesarean-section birth in characterising and following up just under 600 full-term babies: 314 vaginal births and 282 C sections.  It's part of the Baby Biome Project BBC; Sanger Centre. The thing is that, unless something has gone seriously wrong there are no bacteria within the amnion - the fluid filled bag in which the foetus develops; obtaining the nutrients to do that development via the placenta and umbilical cord. The mother's skin, her vagina, let alone the nearby rectum (leaking a little as push comes to shove) are, by contrast, home to a rich variety of microbes. Not the same chaps in each niche, however: each place has a characteristic and different family of bacteria.

With an old style vaginal delivery, the new born gets a a good mouthful of his mother's microbial flora, either directly or as soon as he starts sucking his thumb or his mother's breast. Babies delivered by Caesarean section do in deed get a dose of bacteria but they are much more likely to be those typical of hospital acquired infections. The researchers have to an extent controlled for this but the fact that All C-sections are followed by broad-spectrum anti-biotics (as a prophylaxis against infection through the incision) is another variable that drives the neonatal flora towards the bad bacteria. And while I am definitely pro-choice, mothers who plan on a C-section followed by Nestlé powdered cows milk with or without melamine should really read the details of these comparative outcome studies. There is a huge difference in the quality of the child's intestinal flora when measured 4, 7 and 21 days after delivery . . . but when sampled in "infancy" = 9 months later, everything looks like it's evened out between the two modes of appearance: 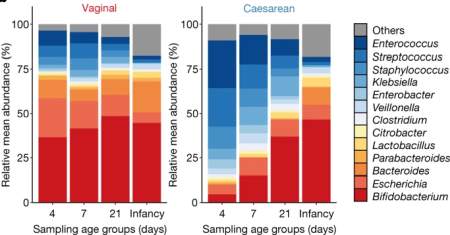