. . . not so good out on the road.
Snooker turned out to be a surprising winner for television sport broadcasting. Back in the day on the BBC it was all criccer and rugger and soccer, with the Olympic Games throw in for variety once every four years. Now there is Sky Sports where you can find competitive bungey-jumping and lacrosse. Snooker TV wasn't going to work at all at all in black and white. When the idea was pitched to the BBC mandarins when colour telly started broadcasting, it was sniffed at because snooker involved a lot of smoking, drinking by over-weigh working class men. That was an alien class to the Cambridge educated decision makers at the Beeb. But if you think about it for a minute, it's a winner. Each match lasts about ten minutes, so you can pack as much into programme as the schedule will allow: complete games, replays, highlights, commentary can fill the [half] hour nicely. We don't have a telly at home, but visiting Pat the Salt I'd rather watch snooker than X-factor - it's better paced. It's one of the many games that I learned how to play during my very expensive education. 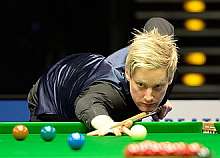 One of the current stars is an Australian called Neil Robertson, currently domiciled in Cambridge, UK. He looks reasonably healthy for late-30s and can crack a distant red into tight pocket better than most. In his day he has been World Champion. Not this year however because he missed his qualifying match at the beginning of October. He set off in good time for Barnsley navved by his SatNav and obeying the robot instructions headed West. Fail! Anyone who'd grown up in the UK would know that Barnsley is an old mill town in Yorkshire and from Cambridge you should start up the Great North Road A1. I don't think he made it to Barnsley, Gloucs, pop 209. But by the time he realised his mistake it was too late to turn. He was rueful rather than furious which suggests that he's a good sport.

Fabulous cueing, geography not so good. Sorry Neil!
Posted by BobTheScientist at 07:09