Vela catches a flash of change 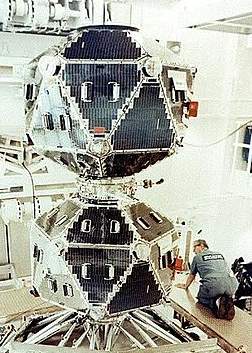 Marion Island is named for Marc-Joseph Marion du Fresne, the French explorer and cartographer - and nothing to do with the DuFresne lenses you find in lighthouses because those are Fresnel "no relation" lenses. The boy named Sue thang apppears to be less of a problem with the French than it is with Johnny Cash. But enough of this free-association. Marion Island, half way between South Africa and Antarctica, appeared over my horizon because of a mysterious <ba-DUM> double flash that was picked up nearby by a US satellite called Vela 5B or OPS 6911 on 22nd September 1979. These icosahedral satellites were launched in pairs [Vela5A and 5B shown R prior to launch with an engineer's bottom for scale] as part of a project to detect and monitor nuclear explosions in space or the atmosphere in contravention of the 1963 Partial Test Ban Treaty (PTBT) signed by USA and USSR. The double-flash was, supposedly uniquely, characteristic of a nuclear blast with a 1ms pulse of light followed by a longer brighter pulse as the initial opaque shockwave dissipates and allows the fireball to shine through. The Vela signal was complemented by some hydro-acoustic data from the Naval Research Laboratory NRL which was capable of picking up all sorts of anomalous underwater soundwaves. The Vela Project had a long line of positive controls as well, when their satellites had correctly identified 41 known nuclear explosions.

The current consensus is that this was an early exercise of nuclear power by Israel, probably with the collaboration or connivance of the Republic of South Apartheid RSA. President Carter's diary for Feb. 27, 1980: “We have a growing belief among our scientists that the Israelis did indeed conduct a nuclear test explosion in the ocean near the southern end of Africa.” indicates that it was the then consensus as well. But admission that Israel had become a rogue nuclear state was extremely inconvenient politically and an "independent" body of high powered US physicists, concocted a scarcely credible collision of possible natural phenomena to explain the Vela flashes. Indeed subsequent advances in science have exposed the explanation as physically impossible rather than scarcely credible.