It's a thing. I'd never 'eard of it until one of my pharmacy technician PTstudents brought it up in a human physiology lecture a few years ago. I said that I'd find out about it and get back to everyone. It's one of those questions that might be interesting to more people in the room than the student and me [I have a very low threshold for cor that's interesting]. I wish I'd remembered what the answer was because last week another student asked a more focussed form of the same question "Why are people who've been pregnant not allowed to make a platelet donation?". There were at least three people in the room who were aware of the procedeure [and probably not much more: only about 1/1000 adults participate]. I undertook to find out and get back to them . . . and you dear reader.

As you know, blood consists of plasma, red cells, white cells and platelets. Circulating in the plasma are the clotting factors Factor VIII and Factor IX used to treat haemophilia [which prev], they are proteins, macromolecules, made of amino acids. Also present in the blood of some people is anti-D, an antibody against Rhesus factor; it is used to treat haemolytic disease of the newborn HDN [which prev]. Antibodies are also proteins, macromolecules, made of amino acids. I go on about the macromolecule schtick because my PTs really cannot grasp relative size no matter how much I bang on about it.

Traditional blood donors can give whole blood every 90 days. This blood is usually typed for ABO and Rhesus blood groups and then separated into packed red cells, plasma, platelets and proteins.
These components have different shelf lives and different storage requirements. Platelets must be stored at room temperature in bags on gently rocking shelves and so have the shortest shelf life ~5 days. 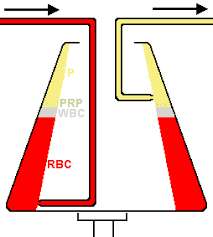 There are never enough donors, so "apheresis donation" has been developed to harvest plasma and platelets every 30 days. Donors are given an anti-coagulant (?Warfarin?) and their whole circulatory system is connected to a machine that spins the blood as it comes through, separating the red and white cells, the platelets and the plasma. The cells spin to the bottom of the machine and are returned to sender. The platelets layer themselves halfway down and are directed to one bag, the plasma (54%) is sent to another bag. The clotting factors are later separated from plasma by cycles of freezing and thawing.

Why don’t they want blood from women who have been pregnant or have ever had a blood transfusion? Because they have been exposed to blood from a different person. Sometimes, minute quantities of blood may leak across the placenta from the foetus even early on in pregnancy. Coming up for, and during, delivery there is more active blood-sharing as the placenta loosens up and things down there get squeezed. The mother will develop antibodies to any blood which is different from hers and these antibodies will persist undetectable in the plasma / platelets as they are processed through the apheresis machine. These antibodies may cause problems in the third party in the process – the recipient of the platelets – who will be genetically different yet again from mother and foetus. Like not wanting blood from residents from the UK in the 1980s who may have been exposed to mad cow disease [variant CJD], the Platelet industry is operating under the Precautionary Principle about these potential anti-bodies. Despite crying out for more platelet donors.

They only have Apheresis Clinics in Dublin and Cork and it takes 2 hours. I guess they give you and cup of tea, but better bring a book or a good movie on your phone. Call 01 4322833 (Dublin) or 021 4807429 (Cork) for an appointment.
Sources:
2+ mins on apheresis donation (for plasma / platelets)
4 mins on Blood Component Separation
Posted by BobTheScientist at 07:38